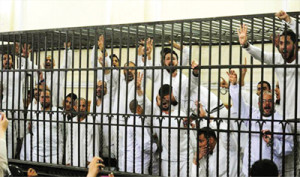 Mumbai: In a strong refutation to the Mumbai police, a metropolitan magistrate court in Kurla here acquitted nine Muslims from charges of being involved in illegal activities and being members of the banned organization Students Islamic Movement of India (SIMI).
Dr Tanveer, Ehtesham Siddiqui, Irshad Khan, Mohsin Mirza, Rahil Shaikh, Altaf Ahmed,Mouzamil, Faisal and Ahmed were acquitted last fortnight due to lack of evidence and failure of prosecution to prove the case against them.
Two out of these acquitted persons, Dr Tanveer and Ehtesham Siddiqui are also accused in Mumbai’s 7/11 serial train blasts case, judgment for which is due to come in near future as the trial court has listened to all the prosecution and defense witnesses in the case.
The case in which all the accused have been acquitted is based on two first information reports (FIRs) which were registered against the accused in 2001 “ one for giving provocative speeches and the other for distributing pamphlets outside a mosque in suburban Mumbai.
The case of the police was that the accused had organised a gathering outside a mosque and given provocative speeches, and also possessed the objectionable literature in the form of books and pamphlets in English, Urdu and Hindi at the time of their arrest.
The defense lawyer alleged that Mumbai police had began crackdowns throughout the city against the banned organisation SIMI on September 27, 2001, the day the organisation was banned by the Union Government under the Unlawful Activities Prevention Act (UAPA) although the gazette had not reached the state home department.
The court had granted bail to all the accused in 2003 due to the above technical lacuna in the prosecution case.
Adv Sharif Shaikh, a senior lawyer appointed for the accused by Jamiat Ulema Maharashtra, said: “No prior sanction was obtained to impose Unlawful Activities Prevention Act (UAPA) on the case so the case was illegal. Also all the seized literature was found not to be provocative or objectionable by the court.”
Elaborating the procedure to be followed after banning any organization, Advocate Shaikh said, “According to the law, a notification regarding the ban has to be issued, a copy of which must be put up either at the head office or at a branch of the organization. The police did not follow any of these rules and with malicious intention arrested accused on the day ban was announced.”
Pleased with the court upholding the defense stand in the case, he further said, “There was no evidence to show that the accused were members of SIMI even after it was banned or that they were involved in any illegal activities before or after the ban was imposed on the organization. I am delighted that court accepted our contention.”
Adv. Ansar Tamboli, assistant lawyer to Adv. Shaikh said, “Although the justice has been delayed as it is a 13-year-old case, but it has provided respite to the accused who had to unnecessarily carry the brunt of being involved in anti-national activities for 13 years due to the ongoing case.”
“We will tender the certified copy of acquittal order before the MCOC special court where two of these acquitted is also accused,” he informed Twocircles.net.
Commenting on the acquittal order, Gulzar Azmi, secretary of Jamiat Ulema Maharashtra legal cell said, “This has once again proved that Muslims are being arrested by police even in the absence of any sort of evidences due to which their future is getting lost in the web of legal battles to prove their innocence.” He believed that this order will help acquitted Muslim boys in other cases too which were built against them on the basis of this case.
“As briefed to me by my legal team, ATS had used this case against one of the accused to invoke MCOC Act in Mumbai 7/11 train serial blast case. On the basis of this acquittal we would again argue before the MCOC court that false case was used to implicate innocent men in the MCOC case”, he added.