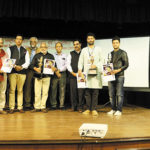 Srinagar: Two Kashmir-based documentary filmmakers, Jalal Ud Din Baba and Abdul Rashid, have won special jury film awards and bronze beaver award for their science films on environment and climate change. The awards were given at the 7th National Science Film Festival and Competition, which was organised by Vigyan Prasar, an organisation under the Department of Science and Technology and National Council of Science Museums (NCSM), Ministry of Culture at Kolkata recently. Jalal Ud Din Baba bagged special jury award for his documentary “Global Warming “ Kashmir Chapter” while Abdul Rashid won bronze beaver award for his film “Don’t Burn Leaves”. In his film, Jalal presents how Kashmir is becoming prone to effects of global warming by documenting the effect on ice-capped mountains and local practices contributing to environmental degradation. Rashid documents how the local practice of burning leaves in almost all parts of Kashmir is leading to air pollution. Both the documentary films were hailed as the best documentary film for their storyline, treatment and narrative.