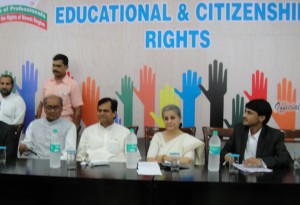 New Delhi: Knocking at the corridors of power in Delhi, people of Mewat have demanded that a university be set up in the Mewat region. Complaining of political indifference and discrimination, they point out that even 66 years after the Independence Mewat remains as one of the most backward regions of the country.
These voices were heard at a convention held at the Constitution Club in the capital on the issue of discrimination and neglect of the Mewat region. Social activists, education campaigners, elected representatives, community elders and religious leaders from the region were unanimous that the Mewat remained one of the most educationally, economically and socially backward regions in the country despite its proximity to the National Capital Region. Convener of the group, Engineer Hafez Khan said each district of Haryana has at least one university and Sonepat and Rohtak districts even boast of six and five universities respectively, but Mewat had none. Talking to Islamic Voice, he said the longstanding demand of the Meo people to have a university had remained unheeded by the successive governments. “We have been forced to come to Delhi to highlight our plight and steep backwardness”, he added.
He said the Mewat Watch Rights Group, which organized the convention, is a group of professionals, who have come together to fight for the rights of the region. The areas of deprivation for the Mewat region and its majority inhabitants, Meos, as highlighted in the convention, ranged from poor educational facilities, lack of social infrastructure like roads, safe drinking water and development projects. The convention talked about lack of affirmative action on the part of the authorities for Meos. “Even when funds are allocated and projects sanctioned they are diverted out of Mewat to other regions. There is also a concerted effort to dispossess the Meo people of their land which has become expensive due to expansion of industrial and commercial activity in cities like Gurgaon and Faridabad during the last two decades. Land sharks were eyeing farms belonging to the poor Meo peasant for occupation and distress sale” Khan added.
The first woman graduate of the region Mohammadi Begum, who is also an elected member of the Mewat Zilla Parishad, told this correspondent that girls want to go to schools and pursue higher studies  but  there is no better education facilities for them. She pointed out that the schools in the Meo-populated villages of Mewat district have very few teachers and lack basic facilities like toilets while the non-Meo populated villages in the district were being provided more teachers than prescribed under the Right to Education Act.  Another social activist Advocate Ramazan Chaudhri dentified non-implementation of schemes meant for Meos, non-performance in the 15-point programme for minorities and communalization of police and the State machinery as the major issues confronting the Meo people and the Mewat region. He said the Mewat is among the 90 Minority-concentrated Districts where minority welfare flagship scheme the Multi-sectoral Development Programme (MsDP) was being implemented, but still remain a scene of pathetic neglect. He also lamented the extremely low allocation of funds for the Mewat Development Board, an agency set up to implement development and welfare programmes.
Mewat regions extends over 1,200 villages (550 in Haryana, 600 in Rajasthan and 50 in Uttar Pradesh) and extends to nearly 100 kilometres in the north west of Delhi. Yet it remains an area of darkness despite its proximity to the capital Delhi. Meos, converts to Islam from Rajput and Jat community, inhabit these villages and their population is estimated to be around 15 lakh. The area sends four to five Muslim MLAs to Haryana Assembly and one to Rajasthan Assembly. A Muslim MP too has been elected from the region frequently.
The convention, apart from raising these issues, also demanded a university for higher education. The presence of more than 1,000 people from the region at the convention exemplified the growing concern for development and rising aspirations among the Meo people. Congress Party General Secretary Digvijay Singh, JD-U MP Anwar Ali, Planning Commission member Dr Syeda Hameed,   senior fellow at CSDS Dr. Yogendra Yadav, social activist Shabnam Hashmi  also addressed the gathering and assured them of help in their just cause.