The 100 year-old mosque in village Hedon Bet, Machhiwara Tehsil in Ludhiana still stands tall, despite zero Muslim population in the village. The mosque that was built in 1920 lies abandoned for want of worshipers. Thanks to village elders, the mosque has not been demolished or encroached upon by land grabbers. The elders of the village refuse to let anyone demolish it as they believe it’s a house of God. The elders of village are firm that as long as they live, the mosque will stand and they will stand guard to prevent demolition or encroachment. “We will not let anyone demolish the masjid, it is the house of God,” says Sarpanch Gurpal Singh to dailysikhupdates.com. The residents of the village overwhelmingly support the elder’s views and prevent anyone from occupying the abandoned mosque or any plan to demolish it.
The Sikhs have a long history of protecting other’s places of worship. The 6th Guru, Guru Hargobind Singh even built a mosque for Muslims.
The Muslim population of the village Hedon Bet of Ludhiana moved to Pakistan in 1947 abandoning their places of worship. 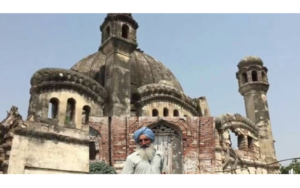