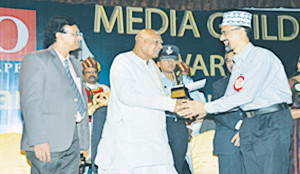 Mr. S. S. M. Sadaqathullah of Kayalapattinam was presented the Media Guild Award by Chennai Metro, an evening daily on August 11 for exemplary work in the field of blood donation at a function held in Chennai by Tamil Nadu Governor K. Rosaiah. Mr. Sadaqathullah who bears the rare blood group A1B has donated blood 47 times. This group is said to be possessed by around one per cent of world’s people. He is trustee of the Kayalpattinam Trust Hospital, member of the India Islamic Cultural Centre, Delhi and Tamilnadu Hajj Service Society. Sadaqathullah says he donates blood only when it is needed.