The Yogyakarta Statement pledges to counter extremist religious interpretations across the world, with authentic primary narratives of peace, from Islam and Buddhism. 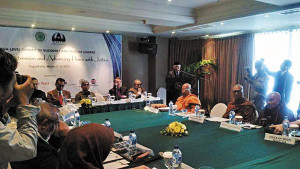 Yogyakarta (Java/ Indonesia): Muslim and Buddhist leaders from South and Southeast Asia have issued the Yogyakarta Statement, which condemns the use of Islam and Buddhism in the politics of discrimination and violence. In the statement, religious leaders from 15 countries called on Muslim and Buddhist communities to maintain peace, because Buddhism and Islam are two of the world’s largest religions.
“We reject such abuse and pledge to counter extremist religious interpretations and action with our authentic primary narratives of peace,” declared Sri Lanka Council of Religion for Peace president Bellanwila Wimalaratana Anunayake Thera, representing the Buddhist community in Sri Lanka, at Borobudur temple, Magelang, Central Java, last fortnight.
Bellanwila pointed out that Islam and Buddha had similar teachings, such as peace, love, compassion and a commitment to justice for all mankind.
Both religions also respect the sanctity of life and human dignity as a basis to ensure basic human rights without discriminating between race, color, language or religion. The Yogyakarta Statement, addressed to all the people of the world, is the result of a high-level summit of Buddhist and Muslim leaders entitled “Overcoming Extremism and Advancing Peace with Justice”, which lasted for two days in Yogyakarta and at Borobudur.
The event was organized by the Indonesian Ulema Council (MUI) and the Council of Buddhist Communities (Walubi) and sponsored by the International Forum on Buddhist-Muslim Relations (BMF).
“We also recognize the need to strengthen governmental measures against religiously motivated discrimination and violence,” Bellanwila said.Based on international instruments such as Article 20 of the ICCPR and the UN Human Rights Council Resolution 16/18, he said all states should fulfill their responsibilities to protect their citizens from religious and racial discrimination and violence.
Meanwhile, the International Movement for a Just World president Chandra Muzaffar, representing Muslim leaders, said leaders of both religions would encourage solidarity, joint strategic actions, education, advocacy and prevention of the emergence of conflicts.
“We will also develop the effective use of media for positive messaging, particularly social and alternative media,” said Chandra Muzaffar. He went on to say that the meeting was very important in light of the potential for conflict between Buddhist and Muslim communities in the South-east and South Asia regions, such as in Thailand, Myanmar, Sri Lanka and Bangladesh.
“If we want peace and justice, it is very important for Buddhists and Muslims to come together because these are two major world religions. If we look at Southeast Asia in particular, where 42 percent of Muslims and 40 percent of Buddhists are found, we find two almost equal communities and they must have good relationships,”Chandra argued.
“The Yogyakarta Statement is very meaningful. It is not for Buddhists and Muslims only; it is for the whole world,” he said.
Religions for Peace, deputy secretary general, Rev. Kyoichi Sugino said his organization would translate the Yogyakarta Statement into nine languages. “We will send it to young people around the world, so they can correct their leaders if they speak out wrongly,” said Sugino.