Islamic Voice 0 March, 2017 12:00 am
New Political Culture has Made India a Moving Anarchy
Caring for Our Common Future
Website on Dr. Sheik Ali 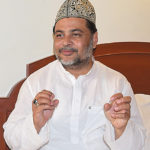 The Union Government has set up a committee to suggest reforms in Madrasa curriculum, management, pedagogy, etc.

India has the largest network of madrasas. Although no statistics are available, the Human Resource Development Ministry under late Minister Arjun Singh in mid-1990s had made a rough survey and came up with a figure of around 25,000 madrasas across the country. These are residential institutions where students were provided food, stay and coaching. Disparate in nature, no central organization coordinates their management, curriculum, exams, certification, finances and recruitment of teachers.  They are affiliated to a host of Islamic schools of thought (maslak) such as Deobandi, Barelvi, Ahle Hadith and some are also run by organizations like Jamaat-e Islami. Barring a few, most of them follow centuries-old Dars-e Nizami, a syllabus formulated by Mulla Nizamuddin.  No framework exists whereby they could be regulated by uniform guidelines in matters of modern management.
The Union Ministry of Human Resource Development has set up a Madrassa Reformation Committee under the Maulana Azad Education Foundation, under the chairmanship of a Foundation member, Mr. Babar Ashraf. Hailing from the family managing the Sufi Dargah of Makhdoom Ashraf Jehangir Samnani at Kichocha Shariff in Uttar Pradesh (some 200 kms northeast of Lucknow), Mr. Ashraf is an engineering graduate from Aligarh Muslim University. He is currently touring the country to bring about homogeneity among various madrassa managements to put together proposals that could streamline the institutions and modernize their curriculum.
Maqbool Ahmed Siraj talked to him while he was in Bengaluru during the third week of February. Excerpts:
There have been moves to bring in reforms in madrasas since 1980s. How would you like to go about the report on the task of reform in madrasas?  Any road map?
The 7-member committee was formed on December 17, by the Ministry of Minority Welfare to look into the curriculum, pedagogy and structure of thousands of madrasas in the country. Minister for Minority Welfare Mr. Mukhtar Abbas Naqvi urged the committee to present its proposals by the end of March so that work on implementation could be taken up in right earnest from the new financial year. It was felt that these institutions play a crucial role in promoting literacy and a little push from the Government could be helpful in the social and economic transformation of the Muslim community. The terms of reference include drafting a policy framework that will seek to bring madrasas under some regulation as far as registration, curriculum, funding, auditing, certification etc are concerned.
Coming as it does from a Government headed by Prime Minister Narendra Modi, the initiative may be misunderstood, notwithstanding genuine intentions.
There is no hidden agenda. I have never been part of the BJP, nor do I share its vision or principles. The Government is genuinely interested in educational and economic development of Muslims, considering them an integral part of the populace which should not remain excluded from development. It is proceeding on the belief that a democratic system should embrace all, shun none, and ensure inclusive development. This has been amply demonstrated by the four budgets presented by the Government and in speeches by HRD Minister, Mr. Prakash Javadekar and Mr. Naqvi. A Government has to think of the welfare of all. No government worth its salt can disown certain groups of people, regardless of their voting or not voting the party in power. The Government’s good intentions can be gauged from the fact that the Ministry of Minority Welfare has made several amendments in the constitution of the nearly quarter century-old Maulana Azad Education Foundation (MAF) in keeping with the members of the Foundation. Earlier, only those Minority institutions were eligible for financial assistance from the MAF which were certified as ‘Minority Institution’ by it. This was a cumbersome process given the geographical spread of the nation. Under the amended laws, a court affidavit would be sufficient for this purpose. Now, even high schools in states like Jammu and Kashmir and states of the North-East region can receive financial assistance for construction of hostels. The timeframe for application for assistance has been expanded from the first quarter of the year to the entire year. Such modifications indicate the Government’s sincerity in extending all facilities to the minorities.
Talk of regulation has been construed as ‘Governmental intervention’ in the internal affairs and management of madrasas in the past. Any indication of resistance now?
I am touring the country and interacting with the prominent madrasa managements. The response is positive. We are trying to convince that some centralized authority would only benefit the madrasas. Complaining of discrimination and shunning the initiatives for inclusion are two contradictory tendencies. One has to be part of a system in order to benefit from it. It must be understood that any institution that does not have registration, affiliation, certification, accreditation will be an illegal institution. As India proceeds on the development trajectory, such institutions will lose their credibility.  The Government has no desire to take away Islamic theological content from the madrasa curriculum. Incorporation of modern sciences and national languages will make them relevant.  It is for them to decide what could be of public interest. Islam is for human progress. We should aim at streamlining our institutions towards that goal.
How could madrasas adopt modern sciences together with traditional curriculum?
There are plenty of such examples where madrasas have been teaching modern sciences parallel to traditional Islamic subjects. Jamia Sufia, in my town Kichhochha Sharif, Jamia Ashrafia in Azamgarh, Jameatul Hedaya in Jaipur and Al-Barkat institutions in Aligarh have been running parallel schools under CBSE. Jamia Azhar (the oldest university still in operation in the world) in Cairo has modernized its syllabus and affiliates thousands of schools in Egypt. How can Muslims adopt Allopathic medicine, cellphone, iPads, Internet and computers but insist upon resisting the sciences that created them?