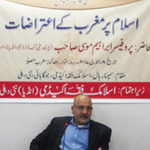 New Delhi: During a question and answer session, following a talk recently on “Islam par Maghrib Ke E’tirazat” or ‘Objections raised in the West about Islam’, Professor Ebrahim Moosa, a prominent intellectual and Professor of Islamic Studies at Notre Dame University’s Department of History (USA), said that many of the questions raised today about Islam and Muslims in America and Europe were in fact raised due to the negative approach and misuse of religion by a handful of misguided individuals professing Islam, but practising wrong and un-Islamic actions. The discussion was organised by Islamic Fiqh Academy, New Delhi. The Professor said that there are about 19 million Muslims in Europe and, in America alone, there are about 3 million Muslims who are not only elite, but very influential. There are Muslims in key posts in the USA and Europe whose image will get maligned if extremist groups like the ISIS are not defeated, discouraged and condemned from every quarter, he said. Against this backdrop, Prof Moosa appealed to Muslims to shun a victimhood mentality and better their relations with their respective fellow countrymen. Prof. Moosa, who has also taught at Duke University and the University of Cape Town, emphasised the need to reinterpret certain jurisprudential decrees which were contextual and confined to particular demands and times. A leading scholar of contemporary Muslim thought, Prof Moosa suggested that Muslims should blend their experiences with their issues and then seek a solution to their problems. He was referring to the need for ijtihad or Islamic way of reinterpreting certain religious texts to find answers to new and day-to-day questions confronting Muslims especially at a time when religion or religious texts were being widely misused by extremist elements to seek to justify their actions.