Kashmir, recently hosted the 12th edition of its five-day Tour de Kashmir Championship, showcasing the state as a destination for cyclists and tourists alike. 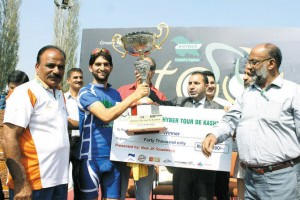 Srinagar: Organised by the Jammu and Kashmir Sports Development Association (JKSDA) in collaboration with the Travel Agents Association of Kashmir (TAAK), the race began in the north Kashmir tourist destination of Verinag. About 70 cyclists from 30 states in India, participated in the event, with 23-year-old Umer Nabi of Team Khyber winning the overall crown for the third consecutive year.
JKSDA Senior Vice President Rouf Ahmad Tramboo said the aim of the championship was to promote cycling and tourism in the Valley. “Every year, we organise the championship. However, this year, for the first time, it was organised at a national level,” Rouf told Khabar South Asia. “Youth in Kashmir like this sport and we want to promote this sport in the Valley. “There were five stages in the championship and all participants travelled through all major tourists hubs of the Valley.”
The event is organized, using the footprints of the world-famous Tour de France. “Next year we are planning to hold this at the international level,” he added. Rouf noted that the championship was an attempt to make locals aware of the benefits of cycling. “After this championship, now locals are showing more interest in cycling. At a time when we have so much traffic and environment-related issues, cycling could be an alternative,” he said. The effort seemed to be working among students and faculty at the University of Kashmir. “We will soon begin a campaign in the university about the benefits of cycling,” head professor of electronics G. M. Bhat told Khabar. “Cycling is also good for your health. We want to make our campus green.”
(Khabar South Asia)