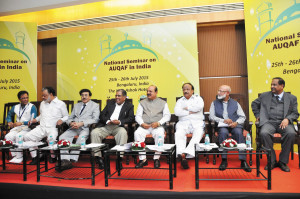 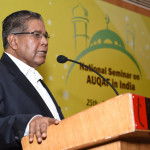 Bengaluru: A clarion call to develop waqf properties for the welfare of the community was issued here on July 26 at the conclusion of a two-day National Seminar on Auqaf in India. The seminar jointly convened by Khasim Khan Educational Trust, Bengaluru and the Institute of Objective Studies, Delhi drew participants from NAWADCO, state Waqf Boards, representatives of prominent waqf institutions and academics and researchers.

Six Lakh Acres of Waqf Land
The seminar noted that the country had six lakh acres of land and properties under four lakh waqf institutions and the newly amended Central Waqf Act and funding institutions put up by the Central Government i.e., NAWADCO, enable the people at the helms to develop these institutions to boost their revenue for speedier development and welfare of the Muslims in the country. Mr. K. Rahman Khan, MP and former Union Minister, under whose stewardship the Act was amended and NAWADCO was constituted, said Muslims should take up the development of the Waqf on their own and should expect the Government to be only a facilitator. He said 90 per cent of the encroachers and illegal occupants on the Waqf estates and properties were Muslims only and no blame sticks to the non-Muslims.
Mr. Khan who is the managing trustee of the Khasim Khan Educational Trust (which runs the six Delhi Public Schools in Bengaluru and Mysuru), said the Central Wakf Council could lend only Rs. 40 crore during its early 30-year tenure. The Bengaluru’s Hazrath Hameed Sha Complex was the first among such commercial complexes to be developed with its loans. He said the tenants from the community insist on meager rents from the Waqf properties and said that the Hameed Sha Complex (with 150 shops and offices) which currently fetches only Rs. 16 lakh a month, would yield Rs. 50 lakh a month if the rents were fixed commensurate to the market trends.
Leading realtor from Bengaluru and Managing Director of the Silverline Realty, who is also a member of the Central Wakf Council, said the community should identify potential properties and seek loans and assistance from NAWADCO to commercially develop such properties. Dr. Mohammed Manzoor Alam, Chairman. Institute of Objective Studies, New Delhi pleaded for use of waqf properties for setting up schools, inns, serais, hostels and other human resource development institutions.

Consolidation of Cases
Mohammed Ali Shabbir, former Waqf Minister in Andhra Pradesh, and the leader of the Opposition in the Telengana Assembly in the former Andhra Pradesh Waqf Board consolidated the cases to the thousands of acres of land belonging to Ishaq Madani Waqf in Vishakhapatna by consolidating them under one court. He said the community should not be sentimental about the waqf issue and should handle them pragmatically.
Mr. Ali Shariff, consultant with Deloitte, and a consul for NAWADCO, said the firm was identifying skills and competencies of various stakeholders for preparing waqf projects to be financed by the NAWADCO and will incorporate the mutawallis and the mansha of the waqif (objective for which the waqf was dedicated by the person).

Find New Resources
Prof. Khalid Rasheed, author of the Waqf Administration in India, one of the seminar work on waqfs in India, said there are 4,90,000 waqfs in the country. Of these, 24,500 can be developed commercially and the community needs to find new sources of finance for developing them.
Ms. Anuradha, legal counsel to the Karnataka Waqf Board observed that there is need to make provision for lessees of the Waqf properties being made liable to pay rents at a reasonable market rate if it was prima facie established that they were illegal occupants and go to appeal to the High Court and Supreme court. She said this was imperative as the court cases prolonged for years together.