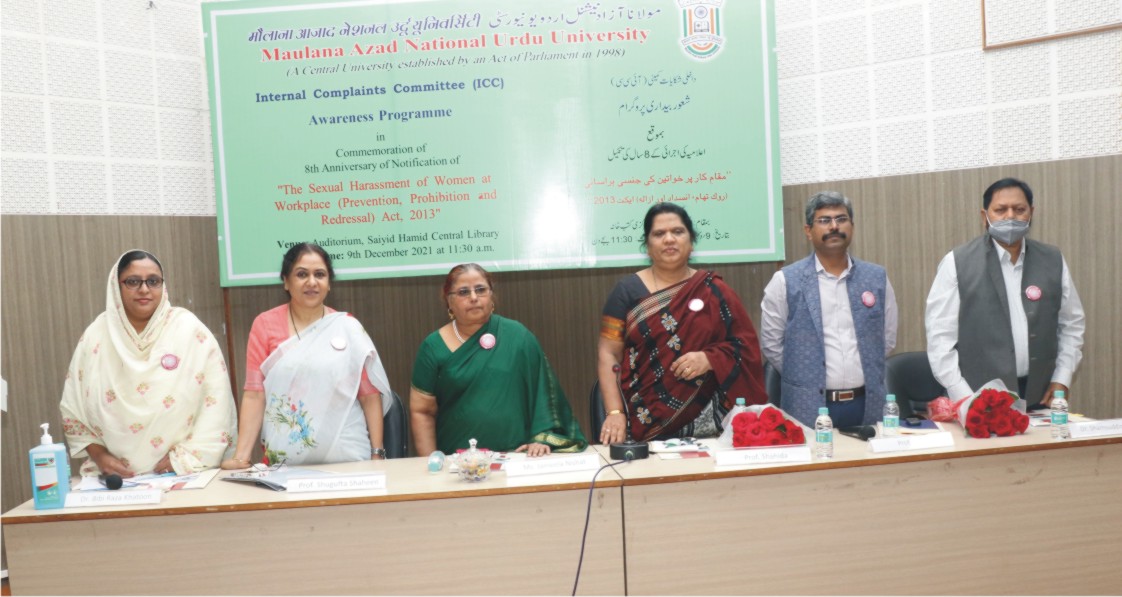 Not to remain Silent on Sexual Harassment for fear of “izzat,” says activist Nishat

Hyderabad: Eminent women’s rights activist and author Ms. Jameela Nishat exhorted the girl students not to remain silent on sexual harassment for fear of “izzat” but report to the Internal Complaint Committee (ICC). Anything you find inappropriate, you can file a complaint about it in ICC, she said while addressing an awareness program held at Maulana Azad National Urdu University (MANUU).

Nishat recalled a case of a Dalit girl in a central university and informed about various shades of sexual harassment and the ones that happen at academic places, especially during research. She also dismissed the patriarchal mindset, which describes women as “Weaker Sex.”

The programme was organized by the Internal Complaint Committee (ICC), MANUU, to commemorate eight years of enactment of ‘Sexual Harassment of Women at Workplace (Prevention, Prohibition and Redressal) Act of 2013 the auditorium of Syed Hamid Centre Library in the MANNU campus.

Prof. Shahida, Director, Centre for Women Studies, presided over. In her presidential remarks, she said there is a need to amend the Act to include sexual harassment cases related to transgender people and persons with disabilities. The Act helped in catching the culprit. She urged the audience to do away with the “culture of silence” in cases of sexual harassment. Referring to perpetrators, she advised teachers and parents to “make them human” rights from a young age.

Prof. Mohd. Shahid, Department of Social Work at MANUU, said that very few cases of sexual harassment were reported, and those reported reach much later after the incidents had occurred. He stressed the need to organize multiple workshops to sensitize students and teachers on the subject.

Prof. Shugufta Shaheen, the chairperson of the ICC, highlighted the importance of awareness about sexual harassment. She said understanding must come from within and begin at school level and home.