Islamic Voice 0 October, 2014 12:00 am
All India Survey on Higher Education – Muslims Have Lowest Rate of Enrollment
Call from Telengana Wakf Board – Observe Austerity in Marriages, No Lavish Dinners
National Seminar on “Emerging Trends in Banking and Finance in India” 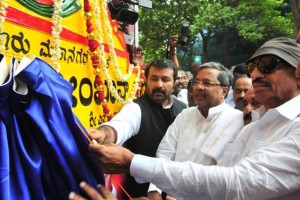 Bangalore: Despite stiff opposition from the BJP, the Bangalore City Corporation named the 100-Feet Road after Dr. S. K. Kareem Khan, the legendary Yakshanagana artist. Though the Corporation (known as Bangalore Mahanagar Maha Palike-BBMP) had passed a resolution in 2004 to rename the road after Kareem Khan, opposition from the BJP stalled the process.
Chief Minister Mr. Siddrahaiah and area MLA Mr. N. A. Harris unveiled the board naming the two kilometer road through the posh colony as Dr. S. K. Kareem Khan Road. The City Corporation stirred into action after noted Kannada activist and leader of the Kannada Chaluvali, Mr. Vatal Nagaraj threatened to himself the stall the new name board if the BBMP ignored the plea to rename the road after Kannada folk artist Kareem Khan.
Yakshagana is a theatre form that combines dance, music, dialogue, costume, make-up, and stage techniques with a unique style and form. This theatre style, resembling Western opera, is mainly found in the coastal districts of Karnataka and Kerala. Yakshagana is traditionally presented from dusk to dawn. Dr. Kareem Khan who died in 2010 at the age of 94, was a freedom fighter and later struggled for consolidation of Kannada speaking areas into the reorganized state of Karnataka. He refused the Freedom Fighter’s Pension from the Government dedicating his services to the nation rather than to any pecuniary gains. He remained unmarried all through the life.
Kareem Khan was educated through Kannada medium and later studied Sanskrit to gain insight into Ramayana and other Hindu scriptures and took up writing of songs in Kannada language.
Speaking at the occasion, Chief Minister announced institution of Kareem Khan Award for two persons each year who serve the cause of Kannada and Karnataka. Mayor Satyanarayana said couplet from Kareem Khan’s songs would be inscribed on plaques on the two side of the prominent road in order to spread awareness about the artist’s views.
Kareem Khan’s grand nephew Tanweer Ahmed, a software engineer, played the leading role in reviving the BBMP resolution to rename the Road.