Seminar and Play on Azad 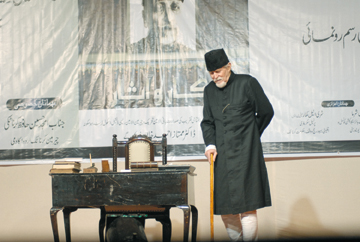 Hoskote: A seminar on the life of Maulana Abul Kalam Azad was held at Samudaya Bhavana in the Al-Ameen Residential School Campus at Hoskote, last month. The inaugural address was delivered by Prof B Sheik Ali, former vice chancellor of Mangalore and Goa Universities. Presenting the presidential address, founder of Al-Ameen Movement, Dr. Mumtaz Ahmed Khan said that Azad was up against the very concept of Partition. A Play on Maulana Azad by Sayeed Aalam was staged by Tom Alter, on the occasion. The stage was set with antique furniture, crockery, books and upholstery portraying the quaint times of Azad, Gandhi, Nehru and Jinnah. The play showcased the multifaceted personality of a legend, portraying Maulana Azad in varied roles, as a freedom fighter, religious scholar, politician and author. It took Aalam almost four years to complete the play. He began writing in 1998 and accomplished it in the form of a complete Play in 2002. The entire play runs into 180 minutes. The flow of words in chaste Urdu without a glitch, in a solo act by Tom Alter was a treat. The Play has been staged all over the globe. Tom says, “I wish to take the play on Azad to Pakistan”.