Seminar on Contemporary Problems of Muslims 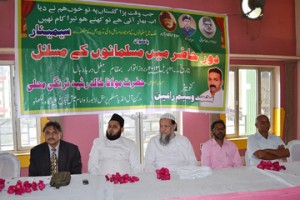 Barabanki (UP): “Due to the growth of multinational companies in our country, the Israeli influence is increasing day by day and they are influencing the national policies,” observed Maulana Khaild Rashid Farangi Mahli, Imam Idgah, Lucknow, while speaking at a seminar on “contemporary problems of Muslims in India,” at Mughal Darbar Hall in Barabanki, last fortnight. Maulana Farangi Mahli was the Chief Guest at the seminar. He said, Muslims are suffering from three types of problems: global, national and regional. He further added that at the time of independence, 37% of Muslims were employed in government services, but now the ratio has come down to 3%. “In 1992 due to new economic policies, Muslim youth also joined multinational companies, but the communal forces could not digest their high positions and prosperity and they changed their strategy. With the help of state agencies, they started targeting doctors, engineers, computer experts and brilliant young boys employed by multinational companies,” he stated. DIG. (Rtd.) G.S.R Darapuri alleged that as part of a larger conspiracy, minorities, especially Muslims are being targeted and they have been given the title of terrorists. Dr. Darapuri said that he himself was a police officer and he knows well that investigation is a long process and sometimes it takes years to identify the culprits.
(Reported by Abdullah, Two Circles.net)