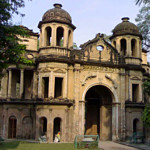 By Mohd Faisal Fareed
Lucknow: The Lucknow-based Darul Uloom Nizamia Farangi Mahal, has issued a fatwa against the Islamic State (IS), terming its activities as “anti-Islam”. It also asked the Indian Muslim youth not to fall in the trap of the “false propaganda of the IS”. The fatwa was issued in response to a query by Lucknow resident Sajid Umar Jilani, who wanted to know whether the activities of the IS, including killing of innocents, were valid in light of Islamic teachings. Jilani also referred to repeated waving of IS flags by some people in Kashmir. In response, the seminary issued a fatwa signed by its rector, Maulana Khalid Rasheed Farangi Mahali, Maulana Naeemur Rehman Siddiqui, apart from Maulana Mohammad Mushtaq and Maulana Mohammad Nasrullah. The fatwa states that Islam does not permit killing of any innocent person. “The Quran mentions that killing of any person without reason is against humanity. It mentions that Allah dislikes war on land,” the fatwa says. It states that Prophet Mohammad too has appreciated those who pardon others and even the Prophet’s companions, who took part in wars, always protected the religious places of others.
(Extracted from http://indianexpress.com/article/india/india-others/indias-first-sunni-seminary-issues-fatwa-against-islamic-state/)