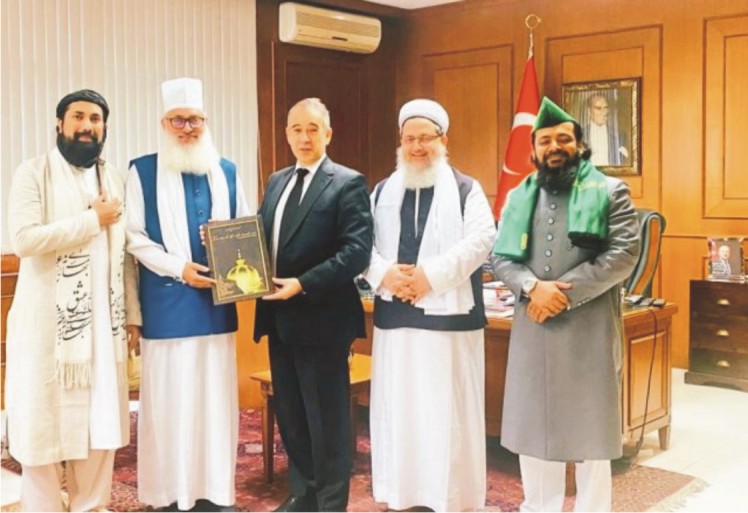 New Delhi: ‘Terrorists are using the name of Islam only as a tool of defending themselves, and they neither have any connection with Islam nor do they have any knowledge of Islamic tenets. Now, it should be obligatory for every Muslim to convey the message of his religion to the world in a proper way’. This was stated by a delegation of the All India Ulama and Mashaikh Board (AIUMB) while meeting the envoys of Islamic nations stationed in Delhi.

Syed Mohammad Ashraf Kichhowchhvi, founder president of AIUMB said the people are confused between real Islam and post-truth Islam. They are facing difficulties differentiating the facts from faults and rumors about this particular religion Islam, said Kichhowchhvi who led the delegation that met the ambassadors of Turkey, Egypt, Iran, Iraq, Indonesia, and Jordan.

During the meet, Kichhowchhvi expressed his concern over the sweeping generalization of Terrorism with Islam stressing that Terrorism has nothing to do with Islam in any manner.

If Islam is a peace-loving religion, then why are such terror attacks being carried out under the banner of Islam. After all, why are the terrorists doing such inhuman acts with the name of Islam?

When some groups circulate rumors and doubtful truth against Islam, he suggested that:”As a Muslim we should not be bent on fighting, quarreling and reacting radically, but we must prove them wrong through our morality and good characters, as practiced by our beloved Sahaba-e-Keram (Companions of Prophet Muhammad PBUH).”

Taking forward the point on Sufism, delegation member and President of AIUMB Karnataka, Syed Mohammad Tanveer Hashmi underlines that no religion of the world teaches Terrorism. Still, unfortunately, people do not know about their religions properly. So, the people should get accurate information first about their respective religions.

He specifically addressed youths and told them that in the post-truth era, the responsibility of the youth of every religion doubles to awaken the people to what their religion wants from them.

He avers that the purpose of Islam is to end oppression and terror, but, regrettably, Islam and Terrorism are being linked sometimes.

He also said that it is the responsibility of every Muslim to follow the teachings of his Prophet and get complete knowledge of the orders of Almighty Allah.

National Joint Secretary of the Board Syed Salman Chishti suggests spreading the message of love and peace as done by the Sufis who have won people’s hearts with love, not with the sword.