Islamic Voice 0 July, 2014 12:00 am
A Dargah with a Difference
5,000 Scholarships for Minority Students
I Lost Seven Years to False Terror Charges. Now I want to Achieve My Dream: Yahya Kammukutty 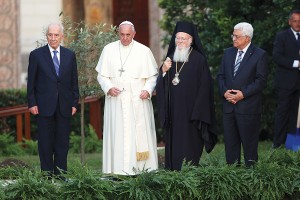 Vatican City: Pope Francis, Israeli President Shimon Peres, Palestinian President Mahmoud Abbas and Greek Orthodox Patriarch, Bartholomew gathered in The Vatican last fortnight to pray together for peace in the Middle East. During the event held in The Vatican, Jewish and Christian men of religion read out excepts from both the Bible and the Talmud, while a Muslim imam read verses from the holy Quran in the presence of Pope Francis and the Israeli and Palestinian leaders. In addition, during the Arabic part of the ceremony, several sections of the Quran were read. “They have prayed for this meeting and even now they are united with us in the same supplication”, he added. The ceremony was conducted in four languages – Hebrew, Italian, English and Arabic. In addition, during the Arabic part of the ceremony, several sections of the Quran were read. “This meeting of prayer for peace in the Holy Land, in the Middle East and in the entire world is accompanied by the prayers of countless people of different cultures, nations, languages and religions”, said the head of the Roman Catholic Church, Pope Francis had invited both Peres and Abbas during his historic visit to the Middle East last month.
“Two peoples, Israelis and Palestinians, still are aching for peace. The tears of mothers over their children are still etched in our hearts. We must put an end to the cries, to the violence,” Peres said. Abbas said: “We want peace for us and our neighbours.” The four leaders then symbolically shovelled soil for a newly-planted olive tree and held a closed-door meeting in a Vatican pavilion, following the collapse of US-backed Middle East peace talks earlier this year. Francis called for “courage” to make peace. “Peacemaking calls for courage, much more so than warfare,” said the Argentine pontiff. It calls for the courage to say yes to encounter and no to conflict, yes to dialogue and no to violence, yes to negotiations and no to hostilities, yes to respect for agreements and no to acts of provocation, yes to sincerity and no to duplicity,” he said.
Tensions are running high between the two sides following the formation of a new Palestinian unity government backed by the Islamist group Hamas.
Israel has since announced plans for building 3,200 new settler homes and has said it will boycott what it denounces as a “government of terror”.
Peres said the Palestinian unity government was “a contradiction that can’t last very long”, but Abbas defended it saying: “One should never reject a chance for dialogue, internally as well.”