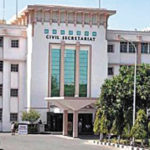 Srinagar: The Jammu and Kashmir government has announced special budgetary initiatives for women, including school fee waiver up to Class 12 in the state government-run educational institutions, and reserved quota of industrial land for female entrepreneurs. This was announced recently by the Finance Minister of the state, Haseeb Drabu, while presenting his second budget in the state assembly. To encourage women’s start-ups in the state, the minister also proposed two entrepreneur development centres, one each in Srinagar and Jammu, to help, guide, and train aspiring women entrepreneurs. The minister also announced that the government will set up four new women’s police stations in Pulwama, Kupwara, Kathua and Udhampur.