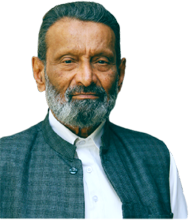 Educationist, founder of Al-Ameen Educational Society and Daily Salar newspaper, Dr. Mumtaz Ahmed Khan passed away on the 27th May 2021 in Bengaluru. He was 86. He founded the Al-Ameen Educational Society in 1966. The Al-Ameen group of Institutions now number more than 200 in Karnataka and all over the country. In Bengaluru, the Al-Ameen institution has various colleges catering to varied streams from pre-university, degree, post-graduation Institute of Management, College of Pharmacy, Medical College and Law College to the Al-Ameen College of Education.
Born on 6 September 1935 in Trichy in Tamil Nadu, Dr Khan did his MBBS at Madras University, Chennai in 1963. After getting married he continued his postgraduate studies, specializing in surgery at Stanley Medical College, Chennai. He moved to Bengaluru in 1965. In 1966 at the age of 31, he started the Al-Ameen Educational Society, also sometimes referred to as the Al-Ameen Movement, which was a pioneering effort to impart education, especially within the state’s Muslim community. He was a recipient of several awards like Karnataka Rajyothsava award (1990), Kempegowda Award and Junior Jayees Award.