No Women Leaders? No Peace!

Women in Jammu and Kashmir have had a hard lot, even those who have been visible in the public arena. Researching my own family’s story, I have found that women are conditioned to wipe away their footprints and end up leaving very few traces of the kind. 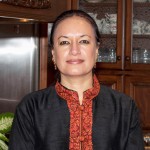 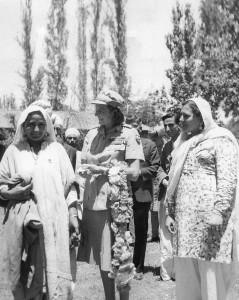 (In photo: Akbar Jehan Abdullah and Lady Edwina Mountbatten with a Kashmiri peasant woman in 1947.  Akbar Jehan’s work with Lady Mountbatten, wife of the first Governor General of post-Partition India, Lord Mountbatten, in the repatriation of young women who had forcibly been removed from their families during the turbulent and bloody partition of the country, was exemplary. She worked indefatigably to restore the honor of those unfortunate women who had borne the brunt of communal vendetta.)

The partially autonomous northern Indian state of Jammu and Kashmir is a beautiful part of the world “ but marred by a long history of violent political and ethic struggles. On September 25, at least nine people were killed when militants attacked a police station and an army camp. The area is my homeland, and my family has been part of its history. I love it greatly. I would like to see the fighting end, and it could, if there were more leaders like my grandmother.

Jammu and Kashmir is part of the larger Kashmir region that is divided into areas of control by India, Pakistan, and China.
Women in Jammu and Kashmir have had a hard lot, even those who have been visible in the public arena. Researching my own family’s story, I have found that women are conditioned to wipe away their footprints and end up leaving very few traces of the kind. Still, Akbar Jehan Abdullah, my maternal grandmother, was so intricately tied with the political trajectory of Jammu and Kashmir that investigating her story has afforded me a glimpse of the momentous changes in regional politics that unfolded from the 1950s to the 1980s “ and gives me hope for the future of the region, if women like her are allowed to thrive.
My grandmother was conventional, religious, and progressive. Her work was a powerful assertion of her convictions. She was the first president of the Jammu and Kashmir Red Cross Society from 1947 to 1951, and went on to represent constituencies in Jammu and Kashmir in the Indian Parliament in 1977-1979 and 1984-1989. My grandmother, unfortunately, was the exception “ far too few women were able to serve in powerful roles back then, and even today, the numbers are dismal. But change is coming.
Imagine the possibility of different destinies for women in the region if their aspirations and wishes mattered.
Today, women in my homeland are gaining new rights and increasingly asserting themselves in politics “ and this momentous shift in traditional gender relationships opens up new possibilities for the pursuit of democracy and regional peace. Women in civic associations and in government can lead the way to pluralistic democracy and support international negotiations towards a sustainable peace in the region.
The best way to put the state’s house in order is by further developing responsive and pluralistic democratic government. Historical foundations for pluralist democracy in Jammu and Kashmir were established by the revolutionary metamorphosis of the agrarian economy during the 1950s, which had groundbreaking political consequences in a previously feudal economy.
Building on the earlier gains, a pluralistic government can now ensure further economic, social, and educational gains for women and marginalized groups. The first step is for local government to assure basic equality. Women citizens should be accorded equal rights with men in all fields of national life “ economic, cultural, political, and in government services. Women should have the right to work in every line of employment for terms and wages equal to those for men. Women would be assured of equality with men in education, social insurance and job conditions, The law should protect mothers and children, but not use motherhood as an excuse to hamstring women.
Not just in Jammu and Kashmir, but in many parts of the world, women can play an important role in establishing a more inclusive democracy and new forums for citizen cooperation. Women offer new ideas, build broad-based political coalitions, and work to bridge organizational divides. Women active in politics must aim not just to improve the position of their particular organizations but also to forge connections across differences to resolve conflicts and rebuild a society. Women, I think, more so than men, understand that the whole population, after all, and just not any one faction, has suffered from the ongoing conflict. Let the women lead. They will help bring peace.
Nyla Ali Khan is a faculty member at the University of Oklahoma and a member of the Scholars Strategy Network. She is the author of Islam, Women, and Violence in Kashmir: Between India and Pakistan (Palgrave Macmillan, 2010), and Parchment of Kashmir: History, Society, and Polity (Palgrave Macmillan, 2012).([email protected])