The Fanatics of Islam

The awful terrorist attack in Kenya, against innocent civilians who just happened to be in Westgate shopping centre in Nairobi, first deserves the strongest condemnation. It is a barbaric, inhumane and an evil crime. 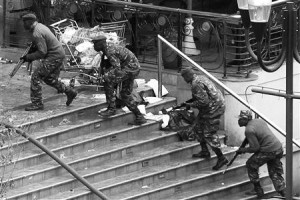 More than 62 people have been killed in cold blood, which can have no justification of any sort.
Then this crime needs some explanation, especially from the Muslim point of view. Because the murderers, who are members of Al-Shabab, a Somali-based militant group, claim to act in the name of Islam. No wonder they checked whether their targets were Muslim or not before killing them. They, reportedly, asked the name of Prophet’s mother (something that not even all Muslims would know) to their victims before pulling the trigger.
Of course, such cruelty in the name of Islam shocks and disgusts the great majority of Muslims, including myself. But we cannot help the situation much by simply saying, “this has nothing to with Islam.” Al-Shabab, Al-Qaeda and similar terror groups are not mere criminals who just happen to be Muslim by culture. They rather claim to act in the name of Islam and uphold Islamic law.
At the heart of the matter is “jihad,” or the Islamic idea of holy war. In fact, as I explained in my book, “Islam without Extremes: A Muslim Case for Liberty,” even the most medieval notions of jihad cannot justify the modern-day terrorism. Because classical jurists have always distinguished between combatants and non-combatants in war, and always respected the lives of the latter. But in the past two decades, Al Qaeda and its ilk rejected this distinction, and justified wanton violence against virtually anybody who stands in their way “ even fellow Muslims who don’t agree with their rigid and literalist interpretation of Islam.
What we are really facing is a virulent fanaticism, created by a poisonous mixture of religious fundamentalism, cultural poverty and political grievances. And we Muslims will not be able to offer remedies unless we discuss this issue more openly, and, if necessary, self-critically.
Turkish President Abdullah GÃ¼l showed a good example of the sort of thinking that we need the other day, when he acknowledged that the Muslim world is “experiencing now what Europe experienced during the Middle Ages.” According to GÃ¼l, “sectarianism” was the core problem, and it was “a trap for Muslims and an indication of being uncivilized.”
Unfortunately, most Muslim opinion leaders refrain from making such self-critical observations about the Muslim world. Their fear is that the Muslim world is already under the scrutiny, if not the cultural onslaught, of the West, and self-critical voices will give only more ammunition to the Islamophobes. But, in fact, it is their silence that really helps the Islamophobes.
In a similar line of thought, most moderate Muslims do not come out and condemn the crimes of groups like Al-Qaeda and Al-Shabab, thinking that these groups have nothing to do with Islam anyway, and thus the best thing to do is to avoid them. They also blame the West for creating such groups, by conspiracy or accident, with its colonial incursions in the Middle East “ an argument that might have some merit. Yet none of this solves our problem and stops the horrors committed in the name of Islam.
We Muslims should thus be clearer about what the problem is: It is fanaticism. And it will not go away unless we show a concerted effort to heal its religious, cultural and political roots.
(www.hurriyetdailynews.com)