A Doctor with a Golden Heart

Dr Farida Ghoghawala, a 74-year-old obstetrician-gyneacologist, now a US citizen, has travelled in India, the Philippines and Jordan to treat women who cannot afford quality health care. She takes no fees for her services! 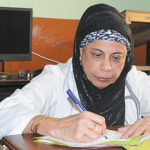 After retiring from her practice in 2000, Dr. Farida started volunteering for health programmes. In 2012, she came to India to help in a health initiative organised by Indian Muslims Relief and Charities (IMRC) and has been visiting every year since then. Since 2015, she has been spending six months in India treating patients and providing quality medical care to women from economically poor families free of cost. Her dedication comes partly from the dire financial constraints she faced during her childhood. Dr. Farida was born in a low-income family in Ahmedabad (Gujarat) in 1944 to Mohammad Usman, who worked in a book-binding centre and Zeenat-un-Nisa, a home-maker. She did her primary education in a neighborhood Government-run Urdu elementary school. However, her parents asked her to drop out, as they weren’t much educated and wanted her to instead focus on domestic chores.
Fortunately, her maternal uncle came to her rescue. He took her with him and got her admitted into an English school. Having earlier studied in an Urdu-medium school, English was quite difficult to comprehend for the little girl, but she was full of enthusiasm to learn. After years of struggle and then getting admission to B. J. Medical College Ahmedabad, she graduated in 1967. Later, she was selected for a four-year residency programme in Saint Johns Hospital, Cleveland (Ohio, USA). With 15 dollars in hand, she landed in the United States. After finishing her residency, she began private practice in Fort Myers Florida and settled there.
“Despite all such work, something was amiss in my life. I always wanted to go back to India, because my childhood memories and our poverty and that of other people living in the neighborhood used to haunt me and I wanted to do something for them, especially the women who used to suffer silently,” says Dr. Farida. “Finally in 2012, I first came to India as a volunteer doctor for IMRC, organizing free medical camps across various parts of India. They are really doing a great job in India,” she says.
The India Health Initiative (IHI) was started by IMRC in 2010. Every year, doctors from the US volunteer for this health initiative by rendering their services free of cost. Since its inception, the organization has successfully conducted seven India Health Initiatives, comprising medical camps across different rural areas, poor localities and slums in India.
Through her efforts, Dr. Farida has treated thousands of women patients in Uttar Pradesh, Telangana, Kerala, Karnataka, Rajasthan, Assam and Haryana in the last four years. “Really, the experience has been so fulfilling that after my first visit in 2012, I started coming to India every year and now I spend six months in India,” she says.
(Extracted from twocircles.net)