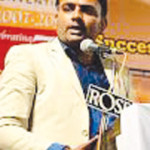 The name of Aamir Edresy may not ring a number of bells in the social circles of India, but he is nevertheless making a difference. He can be summed up as a software engineer by qualification, a businessman by profession and a social activist by passion, currently heading the Association of Muslim Professionals. Edresy, the eldest of six siblings, was born in 1981 in a middle class family in Mumbai and after finishing his schooling, he went to Pune University to complete his Computer Engineering in 2002.
Having studied in an Urdu-medium school and grown up in Mumbai, Edresy was familiar with the condition of Muslims in India. Consequently, after he finished college, he decided to do his bit in helping the Muslim community and other underprivileged classes. Pitching together his dreams, in 2008, he started an online community of Muslim professionals. The commitment of Edresy soon bore fruit, as the online community grew from a few members initially to dozens and such was the enthusiasm of the online community members that in 2008, they decided to call the first meeting of the group. “We started in 2008 after our first meeting by organising awareness drives in schools and colleges about government schemes on education. We started a book donation drive, in which AMP members donated their old books which were distributed among poor and deserving students,” recalls Edresy. “Later, we started giving skill development lectures besides sharing job opportunities among the under privileged,” he adds.
Realising that AMP had a lot of potential, it was formally registered in 2011 under Societies Registration Act 1860, Maharashtra, Mumbai with Aamir Edresy as president. “Initially, I worked as a lecturer at the M. H. Saboo Siddik College of Engineering. Later on I worked as a software engineer in a company. But after registering AMP, I found it hard to manage time between my social activities and professional duties and I decided to quit my job and fully focus on AMP in 2012,” he says. Presently, besides managing his real estate business, Edresy has been able to evolve AMP in into a vibrant pan-India organization of dynamic individuals.
(Extracted from twocircles.net)