Bengaluru Realtor is Chairman of FIABCI 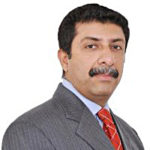 Mr. Farook Mahmood, managing director, Silverline Realty of Bengaluru was installed as the World President of the FIABCI (French acronym of International Real Estate Federation) on May 28, at the annual conclave of the Federation at Andorra, a microstate on the Spain and France borders. The Federation has affiliations of members and associations in 65 countries of the world and represents all sectors of the real estate and construction industry. The Federation connects the real estate brokers, developers, builders, architects, surveyors and all other people concerned with the trade, in most important countries of the world.
Mr. Farook is the first Indian to hold the post. FIABCI was founded in Paris in 1945 and held its first international conclave in 1948. It plays an important role in promoting best practices, standards and norms of the trade across the world.
In a chat with Islamic Voice ,Mr. Farook said nearly 80 important construction companies in India are members of the body who cover around 30,000 brokers.
He said his priority will be to see that City Prosperity Index (CPI) is accepted by various cities. He said CPI is being promoted in league with UN-Habitat and is currently applied in 500 cities around the world as a tool that provides metrics, and data to evaluate urban development. The Index, he informed, contains six dimensions. It measures productivity, infrastructure, quality of life, equity and social inclusion, environmental sustainability and governance.
Mr. Farook has held important positions in National Association of Realtors (India) as President, he was founder Chairman of the Bangalore Realtors Association-India (BRA-I), and was a member of the Central Wakf Council and a member of the National Wakf Development Corporation (NAWADCO). He was also associated with the Al-Ameen Educational Society and several other organizations. A widely travelled professional, Farook has contributed immensely to the promotion of best practices in the profession and for setting benchmarks and standards in the industry.