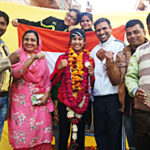 Arshi Khanum 16, of Jodhpur won the bronze medal for India in Boxing (50 kg category) at the International Junior Women’s Boxing Competition held at Sombore, Serbia in Europe, held between January 8 and 15. She was part of a 13-member boxing team from India. Several others too won medals for the country. Arshi Khanum was trained by trainer Vinod Kumar Acharya. The citizens of Jodhpur took out a rally from the railway station to her residence on reaching the city on January 16 through the main thoroughfares of the city. It was led by Muncipal Councillor Kismat Bano. Acharya said Arshi Khanum will represent Rajasthan at the ‘Khel India’ to be organised in Delhi.