Distinction from the Optical Society of America 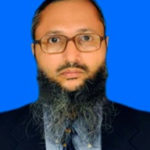 Optics is the branch of physics which involves the behaviour and properties of light, including its interactions with matter and the construction of instruments that use or detect it. Dr. Sameen Ahmed Khan has been single handedly working on a new formalism of beam optics using matrices and quantum technics. He is an assistant professor in the College of Arts and Applied Sciences, Dhofar University, Salalah, Oman. This year, he published five papers describing different facets of his formalism. Amidst strong international competition, two of Dr. Sameen’s papers have been chosen as one of the best this year by the influential magazine, Optics and Photonics News (OPN) published by The Optical Society (OSA was founded in 1916 as the Optical Society of America and renamed as Optical Society in 2008). Each year OSA highlights world-wide breakthrough innovations in optics and photonics in its year end December issue of its OPN Magazine. The research is featured in the special edition, Optics in 2016, which carries the summaries of the thirty selected breakthroughs. Dr. Sameen has been invited to present his new formalism at the 24th Congress of the International Commission for Optics (ICO-24), scheduled to take place during 21″25 August 2017 in Tokyo, Japan.