Fake News – Mainstream Media Makes a Fool of Itself 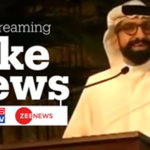 Fake news about the UAE crown prince chanting ‘Jai Siya Ram’ was used by some TV channels to hard-sell Modi’s image to his domestic constituency. But such misreporting is likely to rebound.
Just because the prime minister isn’t in the country, doesn’t mean his cheerleaders get to take some time off. As Prime Minister Narendra Modi toured West Asia, a section of the mainstream media continued doing what it does best “ spin every piece of news to make it sound like an achievement for the pradhan sevak.
Over the second weekend of February, desktop journalists from Times Now and Zee News picked up a viral video showing the “crown prince of Abu Dhabi” chanting ‘Jai Siya Ram’ before delivering a speech at a Ram Katha programme in the United Arab Emirates.
“As Abu Dhabi gears to welcome PM Modi today, a video of its Crown Prince Sheikh Mohammed bin Zayed Al Nahyan is being re-circulated on the social media,” gushed Times Now.
But there was one problem. The man in the video was not the crown prince of Abu Dhabi. The man in the video was actually Sultan Sooud Al-Qassemi, a United Arab Emirates-based columnist. It had been viral for a few months much before the Prime Minister visited the Emirate and millions of people had watched it.
False news promoted by sections of the mainstream Indian media has become a major embarrassment.
(For more details, see thewire.in)