From Tinkering with Metals – To Reaching Out to Mankind! 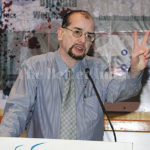 Dr Ali Khwaja’s love and compassion for his fellow beings was the driving force behind the setting up of the Banjara Academy, which has helped transform the life of thousands of people, providing them valuable life-skills!

It’s always a great pleasure to walk into Dr. Ali Khwaja’s office, the Banjara Academy, in Bangalore. Two great reasons for this. Firstly, that you don’t feel like you are walking into an office. Rather, it’s like walking into a friend’s home. Secondly, Ali Khwaja himself is so informal, modest, humble and down-to earth that he instantly makes you feel comfortable and accepts you as you are.
The other day, I landed at Banjara Academy along with a friend to meet Ali . The walls of Ali’s room are covered with little motivational notes about life and a pretty chart depicting caricatures of facial expressions with the question : “How do you feel today?” On the shelf are headgear of different shapes”¦a cowboy hat, a Himachali cap and many others, which Ali probably sometimes wears when he is out on his mission to talk to people about life!

A Mind of Your own
Ali ‘s positivity is mind-blowing. He says that he is what he is today because of 2 years experience studying in a Montessori school in Mumbai. “There I learnt how important it is to have a mind of your own, rather than blindly following what people tell you to do or want you to become. I am the youngest, with three older siblings, a brother and 2 sisters. My father was in the civil services and my entire family, down through seven generations, served the government. But I turned out to be the baa-baa black sheep in the family!” he jokes.
When his father was posted in Osmanabad (Maharashtra), Ali, who was then around 9 years old, spent his time wandering around villages learning things about life. After completing his pre-university studies in Hyderabad, he enrolled at the Indian Institute of Technology (IIT) Povai, training to become a metallurgical engineer. Ali confesses that he did not wish to become an engineer and that those 5 years of B. Tech. taught him why!

Being a Good Listener
Passing out of engineering college, Ali spent two years working with a friend who had set up a fertilizer factory in Hyderabad, after which he bought a printing press and began a paper in Hyderabad. “It was a 16-page tabloid. I really enjoyed writing stories about people, their lives and about the city!”
But destiny had something else in store for Ali, who was destined to become one of India’s most popular counselors. “I was a good listener, when I was a teenager, with my sisters confiding their little secrets to me. Many of my sister’s friends would come to me with their worries or problems and I would listen to them. While this was a small beginning for me as a novice counselor at home for my sisters and their friends, the real professional ‘break’ as I call it, came when Dr. Lakshmi from Sneha Counselling Centre in Madras came to Hyderabad for a workshop to train volunteers . Though it was just a 3-day course, it gave me valuable skills in counseling,” Ali recalls.
Shifting to Bangalore in 1990, Ali was fortunate to meet Alice Saldanha (who passed away 2 years ago), who had initiated ‘Helping Hand’ as a free counseling centre. It was an informal set up, with 12 people, mostly Alice’s friends, working as volunteers. As Alice was getting old, she handed over the baton of ‘Helping Hand’ to Ali who was then managing a construction company under the name of ‘Banjara’.
After meeting many people who told him that they wanted to be equipped with counseling skills, Ali and some friends began a counseling training course at Banjara. It began first as a 3-day course. Later, Banjara went on to offer a range of counseling courses, of varying duration, and, recently, even an online training course. To focus completely on this mission, Ali wound up the constructions business and focused on the counseling courses. The 2016 batch of counseling skills students are the 18th batch from the Banjara Academy.
With a team of committed individuals, the Banjara Academy today is a very sought after place for people of all age groups who wish to do a course in counseling skills.
Says Ali, “We may not be able to solve everyone’s issues or problems, but they may want someone to just listen to their woes and worries. People walk into Banjara for counseling for every issue under the sun”from emotional troubles to career choices. Our counselors who are all volunteers give people who come to us unconditional attention.”

Giving You a Direction
“Life as a counselor may not bring ‘big’ awards,” Ali says, “But that does not matter to us at all. In school or college we are never taught how to handle issues of life”a hurt, a heartbreak, a downslide of self-esteem or fears. As we grow up, we face all these issues at some point of time and then we breakdown. Some take the extreme step of ending their lives, yet others wallow in self-pity and depression. Our mission through Banjara is to let them know that we are here to listen to you. We may not rescue you from your problems, but we try to give you a direction and help you to take life’s decisions on your own and have your own mind.”
Ali ‘s love and compassion for his fellow beings was the driving force behind the setting up of the Banjara Academy. If you ask him to narrate the history of Banjara Academy, you may be treated to a lovely song by him that gives you the message about his mission for society and humanity: