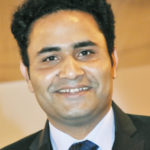 Dr. Askandar Iqbal, a DST-INSPIRE faculty awardee at the Department of Biotechnology, Jamia Millia Islamia has won the prestigious Indian National Science Academy (INSA) Medal for Young Scientist (2016). It carries a bronze medal and a cash prize of Rs. 25,000. Dr. Iqbal received the DST-INSPIRE Faculty Award while working as a postdoctoral scientist at the University of Texas, MD Anderson Cancer Centre in Houston, Texas, USA. He had completed his Master’s degree in Biotechnology from Aligarh Muslim University and Ph.D. from Jawaharlal Nehru University.
Dr Iqbal’s research work focuses on the metabolic behavior of cancer cells and the role of pyruvate kinase M2 in metabolic transformation.
The Indian National Science Academy in New Delhi is the apex body of Indian scientists representing all branches of science and technology. The INSA Young Scientists Award, considered to be the highest recognition of promise, creativity and excellence in a young scientist, is made annually to those whose research work carried out in India evinces these qualities. Until last year, 737 young scientists have been awarded by INSA.