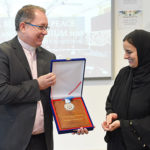 Dubai: Sheikha Lubna Bint Khalid Al Qasimi, President of Zayed University, received a medal from the ‘Religious Freedom and Business Foundation’ recently for her contribution at the 2018 World Business and Peace Symposium and Awards. The honour recognises Al Qasimi’s efforts behind UAE’s Pledge of Religious Tolerance as adopted by the government, civil society and business leaders. She not only works hand-in-hand with local Muslim, Christian, Hindu and Sikhs groups, but also with global political leaders and religious figures such as Pope Francis, helping the UAE become a world leader in interfaith action.
(Extracted from gulftoday.ae)