Yusaffali picks 4.99% shares in Catholic Syrian Bank: Owner of the Dubai based Lulu retail chain store Yusaffali M. A., hailing from Kerala, picked up 4.99 per cent share in Catholic Syrian Bank from its largest shareholder Sura Chansrichawla, said a PTI report on Feb. 13. The RBI nod was awaited. Yusaffali’s office said he was willing to pick up another three per cent from Bangkok based NRI Chansrichawla if allowed by the RBI. Mr. Chansrichawla has been given March 31 deadline to reduce his share in the 93-year old bank from 18 per cent to 13 per cent.

Died: Syed Abdullah Hasani Nadwi, editor of Arabic journal Ar-Raid from Nadwatul Ulema Lucknow died on January 30, a day after he turned 56. He was ailing for some time and death came in a local nursing home. An eminent Arabic scholar, he graduated from the Nadwa and taught Hadith in the seminary for 30 years. He was son of late Mohammad Hasani, editor of Al-Bath Al-Islami.  He is survived by his widow and a son. He was buried in Takia, the ancestral burial ground of the Hasani family in Rae Bareli, An effective missionary, Abdullah was shy of publicity and pursued his subjects with great intensity.

Padam Shree for Prof. Akhtarul Wasey: Professor Akhtarul Wasey of Jamia Millia Islamia has been conferred the prestigious Padam Shree Award. He was honoured with other 80 awardees for his contribution in the field of Literature and Education on the eve of Republic Day this year. .
Prof. Wasey heads the Islamic Studies Department at Jamia Millia Islamia and is also the Honorary Director of Dr. Zakir Husain Institute of Islamic Studies at the University. He is the Editor of Journals such as Jamia, Islam and Modern Age (English), and Islam Aur Asr-e-Jadeed (Urdu). He has written a number of books and his articles have been widely published in journals, newspapers, and magazines. He has been a representative at various fora, both nationally and internationally. He is also vice president of the Delhi Pradesh Urdu Academy.

New Grand Mufti of Egypt: Prof. Dr. Shauqi Ibrahim Abdul Kareem has been elected the new Grand Mufti of Egypt. He replaces the past Mufti Ali Jumaa. Dr. Shauqi, professor at the Jamia Al-Azhar was elected by a council of the senior ulema (scholars) of the  Al-Azhar. Shauqi teaches Islamic jurisprudence at the Jamia Al-Azhar and is not affiliated to any political groups. He was chosen in a stiff contest with the nominee of the Muslim brotherhood. His appointment will have to be ratified by the President of Egypt. Normally, the Grad Muftis have sided with the people in power in Egypt. Former Mufti Ali Jumaa, appointed a few months before the Egyptian revolution, had prophesied paradise for then President Hosni Mubarak.

Ismatullah Khan who took voluntary retirement as Additional Commissioner of Commercial Taxes under Government of Karnataka, joined the Congress party on February 12. Khan currently heads the Muslim Orphanage which is under Wakf Board administration for the last 30 months. The Board has been dilly-dallying over holding of elections to the 120 year old Orphanage. Khan is the fourth administrator to hold office within the span of 30 months. Hailing from Chitradurga, he is likely to seek Congress ticket from the constituency in the forthcoming Assembly elections. Khan is also a nominated member of the Karnataka Board of Asqaf.

Dr. Kaup Muhammad, Dean, American City College, UAE was presented the ‘Beary of the Year Award’ at the 24th Annual Convention of the Beary Association held here on February 17. Union Minister for Minority Affairs, . K. Rahman Khan also distributed cheques for the scholarships to the tune of Rs. four lakh among the community students at the function. Bearys, a miniscule community, mainly concentrated in the South Kanara district of Karnataka, speak Beary language, an amalgam of several languages and are engaged in business. The community has of late started paying attention towards higher education and nurturing entrepreneurs. Several of the members of the community are employed in the Gulf nations. President of the Beary Association, B. M. Farooq, P. A. Ibrahim Haji, M. A. Mohammad, former minister B. A. Muhammad, and journalist B. M. Haneef participated in the annual convention.

Pak Peace Awards for Mazher, Rohilas, Sharma: The Karachi based Association for Communal Harmony in Asia (ACHA) has conferred the Peace Star Award on Dr. Mazher Hussain of Cova, Lajja Shankar Herdina and Pramod Sharm, all from India and Ms. Sheema Kermani of Pakistan for the year 2013. The award ceremony was organized on February 19 by Pak Peace Coalition, Pakistan Institute of Labour Education and Research (PILER) and Arts Council of Pakistan. Karamat Ali of PILER urged a no-war pact between India and Pakistan and reduction of vsia snags. Mr. Herdenia said secularism is the only solution for social harmony in South Asia. He said Mohammed Ali Jinnah wanted a secular Pakistan. Dr. Mazher Hussain paid rich tributes to late Syed Iqbal Haider and dedicated his award to him. He recalled that after 2008 Mumbai attacks the peace activists of both India and Pakistan had visited four corners of India. “Iqbal Haider and I visited Nagpur, which is the headquarters of RSS. We visited their office and late Haider boldly presented his point of view.” He said 80% of problems occur between September and December. In his view the budget in India is announced in March and the conditions are created to raise Defence budget. He said people of both countries are not involved in making foreign policies. No monetary value is attached with ACHA awards, a press release from COVA said.

Mazher Hussain on SBH Board: Government of India has appointed Dr. Mazher Hussain as Director on the Board of Directors of State Bank of Hyderabad. Holder of Doctorate degree in Philosophy, he began his career in the field of computers and education and has been engaged in social activism since 1997. Founder and Executive Director of Confederation of Voluntary Agencies (COVA),  Dr. Hussain is associated with a number of government and civil society bodies at the State, National and International levels. His focus is promotion of communal harmony in India and peace at South Asia level, says a press release from Mohammad Turab, executive secretary, COVA. 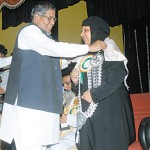 Jamia Millia student Mridul Kumar Upadhyay has been awarded $2000 ASME Foundation Scholarship, New York. ASME is American Society for Mechanical Engineers. Mridul has been awarded this scholarship for his combined intensive honors curriculum with regular voluntary work as a Mechanical Engineering student in Jamia Millia Islamia and he is the first Indian student to win this scholarship. He did his B.Tech from Jamia in 2012.

Best Economist Award: Dr. Lubna Sarwat from Hyderabad has been adjudged the winner of the ‘best economist’ award 2012 by the Indo-Kuwait Friendship Society. Lubna has done Ph.D in Islamic Finance and Economics from TriShakti University of Indonesia.