Islamic Voice 0 May, 2018 12:00 am
Zarina’s Charity Flows in Mumbai Slums
Haifaa Al-Mansour’s ‘Miss Camel’ Wins Award at DIFF
How a Muslim Woman from Malaysia became the Mother Teresa of Montreal 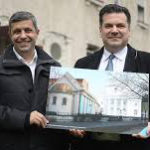 Raed Saleh, left, a Berlin senator, and the city’s Jewish community president, Gideon Joffe, hold an architect’s rendering of a planned reconstruction of the Fraenkelufer Synagogue.

Berlin: Raed Saleh, a Palestinian born in the West Bank, wants to rebuild a synagogue in the German capital. Now the dream of this Berlin politician is a bit closer to reality. Standing in front of the Fraenkelufer Synagogue on a chilly March morning, the senator and leader of the Social Democratic Party here announced plans for the reconstruction of a building that was largely destroyed in the Kristallnacht pogrom of 1938. Saleh’s goal, endorsed by Berlin Jewish Community President Gideon Joffe, is to make a statement against growing anti-Semitism in the capital city “ and against discrimination targeting Muslims, too. “If you say you want to support Jewish life in Germany and Berlin and Europe, and you don’t just want to pay lip service, then you have to carry it out concretely,” said Saleh, 40, who immigrated to Germany with his family when he was 5.
“I would never have thought that a Berliner of Palestinian background would help the Jewish community,” Joffe said, standing beside Saleh, who was born in a village near Nablus. “I find it to be a fantastic story that allows us to look with hope into the future.”
Fraenkelufer, which sits on the banks of one of Berlin’s many canals, is located in a multi-ethnic neighborhood with many Arab residents, a colourful market and shops with Arabic signs. His idea, still in the early stages, is to build a structure resembling the classical 1916 synagogue by architect Alexander Beer. Saleh said the project is likely to take several years to realize.
(Extracted from jta.org)