An Indonesian farmer understood why the land was turning barren and singlehandedly planted 11,000 trees. 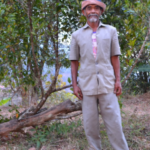 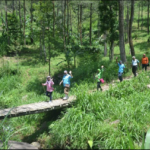 Sadiman, a 67-year-old man from the Wonogiri province of Central Java, Indonesia, has managed to turn his drought-prone village into a groundwater-rich region by leading a campaign to replant trees on a nearby hill for the past 21 years. This region had been losing its forests because of fires and extensive logging between 1960s and 1980.
Since 1996, Sadiman, a farmer in Dali hamlet, began encouraging local residents to plant more trees on the nearby Gendol Hill in an attempt to curb a severe water crisis that used to regularly hit the village, especially during the dry season.
Situated on the southeastern slope of Mount Lawu, which is located in the border area of Central and East Java provinces, the hill had turned almost bald. The extreme deforestation made the Gendol River, which used to be the only source of water for the Geneng villagers, quickly dry up, putting local residents into a severe water crisis that lasted for years.
Sadiman says he first came up with the idea to revitalise the hill when he was tapping rubber from rubber trees on the hill to make ends meet. “I found out that many rubber trees no longer produced rubber latex. Then I realised that the water crisis was too extreme. Even the tree trunks had dried up,” he said. Realising that somebody had to do something about this, Sadiman started to plant trees in the devastated forest area. He has been planting trees on the 100 hectares of the forest land for the last 21 years “ and he has been doing this by himself.
Sadiman’s sacrifice is simply astonishing. Being a simple farmer himself, he is already struggling to get money. However, his humble living conditions did not stop him spending his own hard-earned money to buy the seedlings that would be planted to become the forest. A banyan tree seedling would cost him between 5,000 and 10,000 Rupiah “ that’s the equivalent of $3.70 to $7.40,” which was a lot of money for him. To overcome this challenge, Sadiman began to cultivate clove tree seedlings at his yards. Ten clove tree seedlings were worth a banyan tree seedling.
Sadiman’s dedication is beyond question. He was called a “crazy person” many times because of his actions. Some of his seedlings were even pulled out of the ground by irresponsible people. However, this didn’t stop him from planting the trees. Non-stop since the early 1990s, Sadiman kept on planting trees and taking care of them to ensure they grow strong and healthy. He was thus able to grow 11,000 trees on 250 acres of land. Thanks to his persistent hard work, the forest started to recover, and indeed thrive.
More and more springs and streams have been revitalised to provide a reliable water supply for the villages at the foot of Mount Lawu. Those who called him “crazy” began to realise the importance of this wise old man’s work, and more and more people are becoming aware of the importance of the forest in the bigger picture.