Chandigarh: In a solemn ceremony, a young braveheart from Kerala, Sifiya Haneef, was conferred the prestigious Neerja Bhanot Award by the chief guest, Wendy Sue Knecht, who had come down specially for the award function from Los Angeles. Wendy was also working with Pan Am in the 80’s and was a Trainer of Neerja Bhanot in 1986. The award was instituted in 1990 in memory of Neerja Bhanot, who had saved hundreds of lives while sacrificing her own, during a hijack at Karachi airport. A specially constituted jury comprising 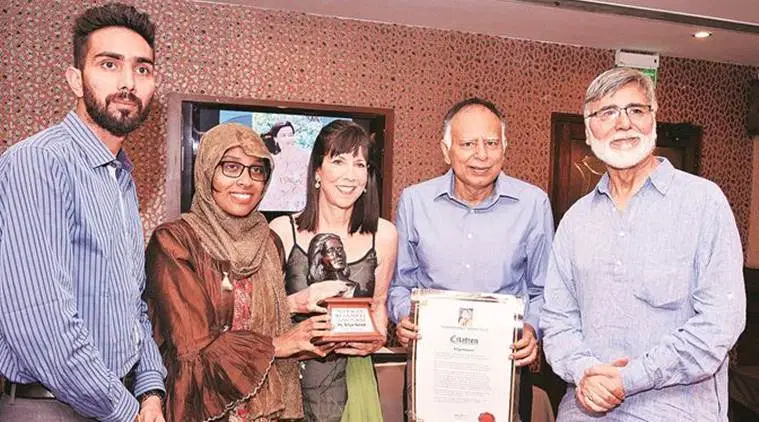 three Rotarians Sneh Popli, Manjit Kaur and Anu Dhingra decided that Sifiya deserved the award as she met the criteria laid down by the Trust which stipulated that the awardee has to be an Indian woman, who, when faced with social injustice, overcomes it with guts and grit and helps other persons in similar social distress.
According to Akhil Bhanot, managing trustee, Neerja Bhanot Pan Am Trust, “Sifiya got married when she was 16 and her studies were stopped. Unfortunately, her husband died when she was 20. She had two children by then. Sifiya wished to continue her studies, but did not get any support. Not willing to give up, she took on a part-time job and resumed her studies.” He added, “After a lot of struggle and realising that life was very tough not only for her but for other widows as well, she started spending her salary on helping widows. She started a Facebook page called ‘Chithal’ where she wrote about issues faced by widows. She met a lot of sick mothers, children, elderly people, cancer patients and more. She would update her page, documenting the problems these people were facing and started getting public support to solve their issues. Today, she is helping more than 300 families by providing homes, constructing toilets in colonies, distributing medicines, giving pension etc.”
(Extracted from indianexpress.com)