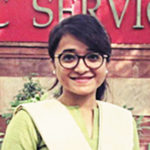 New Delhi: Ummul Kher, a 28-year old Ph.D. scholar from Jawaharlal Nehru University, overcame extreme poverty, ill health and formidable odds to emerge successful in the UPSC competitive exams whose results were announced on May 31.
Ummul Kher suffers from osteoporosis (weakness of bones), due to which she suffered bone fractures at least 15 times and underwent 17 surgeries. Having spent her childhood in a slum in the Nizamuddin area of the capital, Ummul Kher had to relocate after 7th standard to Delhi’s Trilokpuri colony as her hutments came under the DDA’s bulldozers. Her father used to sell groundnuts on footpaths. The family wanted Ummul Kher to discontinue her studies, but she remained determined to continue them. She started taking tuitions in order to fund her fee and school expenses. She had rented a single-room tenement in Trilokpuri, where she would teach children from 4 pm till 11 pm in order to raise necessary funds for her own education.
She herself joined the school for physically-disabled children in Karkardhooma area of the capital. Later, she was admitted into the Amar Jyoti Charitable Trust school, where education was free. She scored 91% marks in the 10th std. Board exam and 90% in the 12th std exam. She went on to do BA in Psychology from Delhi University’s Gargi College. She had to opt for MA in International Relations in her PG classes in JNU. She could not take her favourite Psychology as it necessitated internship, in which case she would have to forego her tuition classes and the income to fund her studies. However, things got relaxed as she entered JNU where expenses were less and she had free accommodation. She was even sent to Japan for an International Leadership programme in 2014. She was the third Indian to be selected for this programme during its 18-year history. She completed her M. Phil. She cleared Junior Research Fellowship (JRF) which enabled her to get a fellowship of Rs. 25,000 a month. While pursuing Ph.D. she entered the candidature for the UPSC exam and scored 420th position in the first attempt itself.
Ummul Kher’s grit, determination and tireless effort to achieve her ambition have come in for all-round praise and appreciation. She not only overcame her debilitating bone disorder, but also opposition from her family and insensitivity of the society.