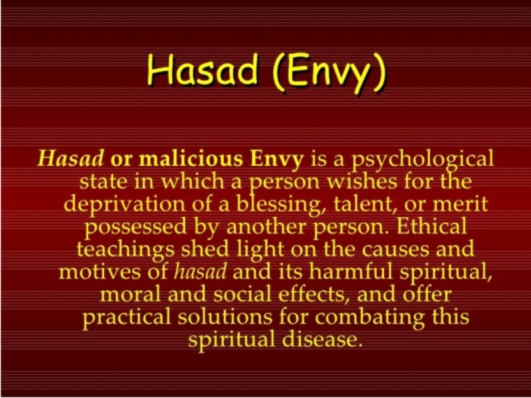 Burn Not Your Good Deeds

Dr. Yaaseen Masvood 0 January, 2022 5:45 pm
The Vision of Prophet Muhammed (pbuh)
The Prophet was a Teacher, Guide and Mentor
Words of Wisdom from our Prophet

Whatever Allah has given, in whatever manner and in whatever proportion He has given, it is from His infinite and perfect Wisdom and Mercy. These blessings should be used to show gratitude to Him and not be the means of arrogance/pride. Whatever He has not given should not result in us becoming envious of others for whom He has given that particular blessing.

Envy is to entertain a feeling of unhappiness at a better fortune and sound quality that Allah has granted to someone else. It sets in when we tend to feel that we should have been given a particular blessing instead of what has been given to someone else. At its worse, it could also lead one to wishfully think that the specific blessing should be removed from that concerned individual. Not nipping this evil in the bud would only result in the mushrooming of green-eyed monsters. Allah’s protection is sought!

Imam Qurtubi (rah), a classical commentator of the Qur’an mentions that envy was the first sin committed in heaven and the first sin committed on the earth. When Iblis was commanded to the prostate Adam by Allah, he refused out of envy/jealousy.This got him expelled from the heavens and earned the curse and wrath of Allah till the end of time. Similarly, when the two sons of Adam were commanded to offer their sacrifices to Allah, it was accepted from Habil and was rejected from Qabil. This angered Qabil, and he was overtaken by envy. This poisoned his heart so much that he even did not think twice before committing the first murder on the face of the earth.This ultimately led to the accumulation of a portion of the sin of murder to him every time murder is committed on the face of the earth.

Scholars and righteous predecessors from the past have always held this evil trait to be one of the diseases of the heart. They have worked towards eradicating this immoral and wicked characteristic from themselves from those around them, warning them of the evil consequences it will potentially cause to the cleanliness of the heart. That is because our Prophet (pbuh) warned us when he (pbuh) said: “Avoid envy, for envy devours good deeds just as fire devours wood.”(Abu Dawood). What can be a greater loss than to have worked deeds of righteousness in this world, only to find, in the Hereafter, those deeds being eaten away by this negative attribute?

Unlike most other evil traits, this is one wicked quality that may be directed even towards people of the same household. This is precisely why Yaqub (alaihissalam), father of Yusuf (alaihissalam), ordered his son to hide his dreamfrom his brothers, lest it may cause envy in their hearts. Yaqub (alaihissalam) feared that if Yusuf (alaihissalam) narrated his vision to any of his brothers, they would envy him and conspire evil plots against him, thus causing his demise. From this episode, it becomes clear that we should hide the prospects or the coming of a bounty until it comes into existence and becomes known, so that the chances of falling prey to the envious nature of people around us can be best avoided.

Any Muslim who nurtures no ill-feeling towards any other fellow Muslim and specifically shows no envy towards anyone, whom Allah has favoured with a particular bounty, can be hopeful of entry into Jannah through the mercy of Allah in the Hereafter, as the following hadith shows:

Any individual who nurtures envy will not only subject themselves to its evil consequences, but it will also be detrimental to the unity of the Ummah, as well. This is why our Prophet (pbuh) advised us: “Don’t sever relations of kinship, don’t bear enmity against one another, don’t bear aversion against one another and don’t feel envy against the other and live as fellow-brothers as Allah has commanded you.” (Sahih Muslim). Simliarly worded narrations found in the other canonical books of Ahadith also point to its significance.

These traditions of our Prophet (pbuh) not only highlight the degree of significance Islam attaches to uprooting this evil mindset but also points to its sublime teachings, explicitly concerning the perfection of moral values in human beings.

The practice of our Prophet (pbuh) is clear enough to earn us the Divine protection of Allah throughout the day and night from having this evil trait in our hearts and also to be protected from being victims of this malaise. He (pbuh) advised us to recite Sura Al-Falaq (along with Sura Ikhlas and Sura An-Naas), once after Dhuhr, Asr and Isha and thrice after Fajr and Maghrib, so that Allah will protect us from this evil and its consequences. The fact that these surahs used to be an integral part of morning and evening litany and a part of his remembrances before retiring to bed also shows the importance he (pbuh) attached the subject on hand.

May Allah protect us all from the evil of jealousy and its evil consequences and give us a clean heart worthy of entering Jannah in Aakhirah.