The High Status of a Mother!

Islamic Voice 0 May, 2021 2:26 pm
Allah and the Limits of Human Imagination
The Night of Power
Triple Talaq ‘Does The Quran Allow Instant Triple Talaq?’ 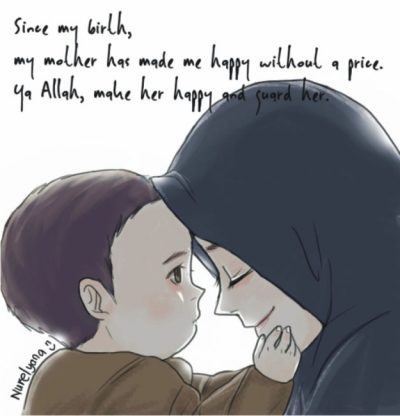 While the world celebrates Mother’s Day on May 9, let us reflect on the status of mothers in Islam, according to the Quran and Hadith.
Mothers are held in very high esteem in Islam. The word ‘mother’ is not only a word; it is a blessing and a gift from Almighty Allah.
Islam gives mothers the highest position and commands children to be grateful, respectful, kind and obedient to their mothers.

The Quran says:
“Your Lord has decreed that you worship none but Him and that you be kind to parents. Whether one or both of them attain old age in your life, say not to them a word of contempt, nor repel them, but address them in terms of honor. And out of kindness, lower to them the wing of humility and say, ‘My Lord! Bestow on them Your Mercy even as they cherished me in childhood.’”
(The Quran, 17:23-24)
“And We have commanded people to honour their parents. Their mothers bore them through hardship upon hardship, and their weaning takes two years. So be grateful to Me and your parents. To Me is the final return.”
(The Quran, 31:14)
“We have enjoined on man kindness to his parents; in pain did his mother bear him, and in pain did she give him birth”.
(The Quran, 46:15).
The exalted status of a mother can be gauged from the following incident: Once a man came to the Prophet Muhammad (Pbuh) and said: “O Messenger of Allah! Who from amongst mankind warrants the best companionship from me?” He replied: “Your mother.” The man asked: “Then who?” So he replied: “Your mother.” The man then asked: “Then who?” So the Prophet replied again: “Your mother.” The man then asked: “Then who?” So He replied: “Then your father.”
It is narrated by Asma bint Abu Bakr that during the treaty of Hudaibiyah, her mother, who was then a pagan, came to see her from Makkah. Asma informed the Messenger of Allah (Pbuh) of her arrival and also that she needed help. The Prophet (pbuh) said, “Be good to your mother.” (Bukhari, Muslim).

How to Behave With Your Mother
• Always show gratitude towards her.
• Always be kind and speak softly to her.
• Be at her service whenever she needs you.
• Never express annoyance even if she is doing something annoying. Do not repel her.
• Always obey her if it is not against the Deen.
• Pray for her.
O God, have mercy upon my mother and keep her happy in this world as well as in the Hereafter. Ameen!