Azeem Bolar is unable to see and is partially paralyzed. He lost his eye-sight more than 20 years ago. But as a trained counsellor, he is working wonders by bringing people out of their shells of fear, shame, shock, depression and hopelessness. It has been Azeem’s ‘blind faith'”in God and in his own abilities that has helped him not only handle his life with such grace and dignity, but also contribute positively to society. 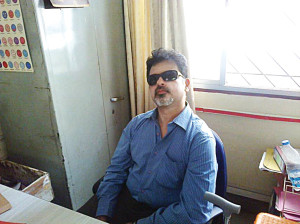