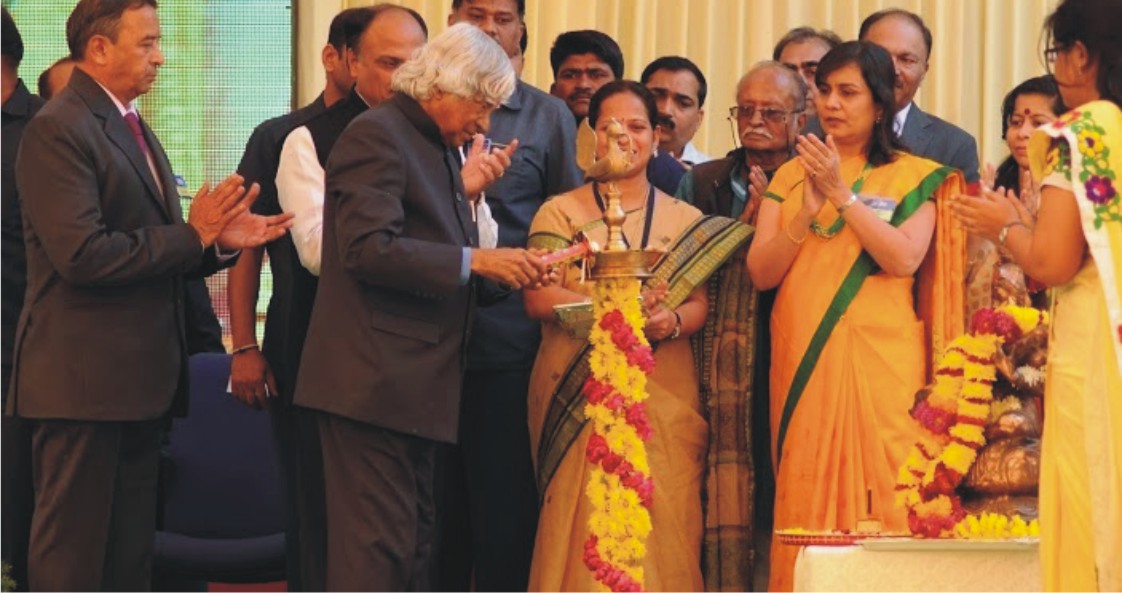 I have had the honour of serving as a Vice-Chancellor to three major universities in India. One of these was the central university of Pondicherry, where I spent six years. My period is termed as a golden period of 300% growth. The B grade university for 20 years was turned into A grade, ranking top 10 in the country and less than 350 in the world ranking.
Like several other public institutions, religious and cultural practices prevail in Pondicherry university too. I want to share my thoughts on such practices and my response when I was head of the institution.

In Pondicherry University, seminars or conferences would invariably start with the lighting of oil lamps on a brass pedestal followed by an invocation, either in praise of goddess of learning or a song in praise of the local language and culture. To welcome the Vice-chancellor to any grand function, a few girl students would stand at the door to garland him and put a little sandal paste on his forehead. On the last day of Dasara, there would be worship, and at the end, a big pumpkin would be brought and broken in front of the chief of the institution. On Independence Day ,Gandhi Jayanti and Ambedkar Jayanti, the Vice-Chancellor would first garland the statue of Gandhiji or Babasaheb Ambedkar and offer floral tributes. I am sure the practices are not much different in other public offices or government institutions.

I want to narrate my response. I would accept the garland from the students and the sandal paste on the forehead, light the lamp symbolizing the start of a function and stand up with all when the invocation was sung. When a pujari would come to my room with a lamp in a tray, I would keep a currency note in the tray and say thank you with a pleasant smile. I would lead the garlanding of statues of Gandhiji and Babasaheb Ambedkar and pay floral tributes. Finally, on Dasara, they would invite me to watch them rotating the pumpkin three times and break it into pieces on the ground. I would stand and watch while the rituals were being conducted.

In my perception,this was an appropriate response in a multi-religious and multi-cultural society if one is working in a public office particularly holding high positions. We need to learn to relate to different cultural settings appropriately, with respect, regard for others, goodwill, and wisdom.

Imagine a hypothetical case of a Muslim Vice-Chancellor, who is looked upon as a respected figure by hundreds of teachers and thousands of students. Suppose he had avoided doing all that I did.

What would he have achieved thereby? Nothing positive. Firstly, he would have hurt the feelings and sentiments of innocent students. But it may not just end there. His attitude could be picked up by the media and could be used as a means to polarize society and shape public opinion to embarrass theentire community. The worst affected might be innocent Muslim students and teachers, who would be embarrassed and could face awkward comments and even face bias. In brief, he would have disturbed the harmony, tranquility, and learning environment of the campus, and he would be distracted from his challenges of management, development, and providing academic leadership, which he was appointed for.

I must also share thatI could provide a place for namaz on the campus, arrange for sehri and iftar in Ramadan, and place for tarawih and arranged for only halal meat to be served in university hostels. It was mutual tolerance and respect that allowed me to do what I wanted to do for the university’s good and to maintain harmony and come out with laurels that the community would also be happy about.

Several cultural practices are not specific to any one particular religion. They are often shared by people from different religious backgrounds. It is a fact that many Hindu traditions have also been embedded in Indian Muslim society, and they should be considered cultural. To cite a few, a particular sort of necklace with black beads in weddings, sindhur on a married woman’s forehead in Bengal, haldi and mehendi and face-showing ceremonies in marriages, and many more.

The biggest challenge before the Muslim community today in India is polarization, Islamophobia, and lack of connectivity and cordiality of the community with the majority population. Our children’s future is our priority, good relations and cordiality with the majority population are very important. Besides, the community’s youth should enter higher education in large numbers and aim to attain high positions in government organizations and also in every profession, including finance and banking. A community that secludes itself from mainstream society will always be the biggest loser of the gains of the nation’s progress.

Every community always respects a practicing Muslim for his good conduct, honesty and integrity, wisdom and regard, good relations, tolerance, and respect for others.