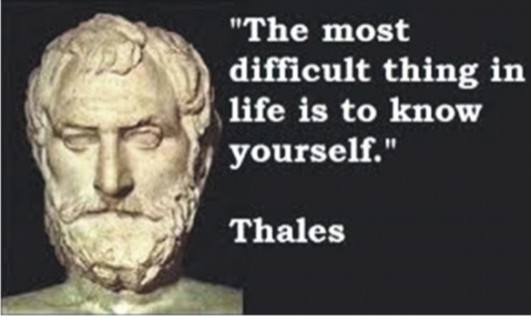 What Has Life Taught Me

Spiritual enlightenment and the pursuit of truth alone can give man the freedom he struggles for.

In every individual’s life there comes a point when he must undertake a self-audit and self-evaluation when believers check their accounts in Heavenly currency terms. Life is really short, and it is only when you are at peace with yourself and the world that you can find the tranquility one needs in order to remember God and contemplate the realm of the cosmic powers. As a priest at the temple of the Oracle of Delphi in ancient Greece, Plutarch passed by an inscription on the temple wall every day that read “know thyself.” This inscription is a means to begin to explore who or what you are in your essence beyond what you see in the mirror.

My parents taught me religion, culture, and spiritualism. But I must have imbibed something more something which told me that all the world’s thoughts, all the world’s most beautiful languages, and literature, are but vehicles for that ineffable message which comes to the heart in rare moments of ecstasy. I have explored Western lands, Western manners, and the depths of Western thought and Western learning, to a considerable extent. But I have never lost touch with my Eastern heritage. Through all my successes and failures, I have learned to rely more and more upon the one true thing in life – the voice that speaks in a tongue above that of a mortal man.

As Plato said, “The unexamined life is not worth living.” We need to set aside some time from our daily lives to reflect on and understand the harmony of nature, count our blessings, and radiate positive vibrations. These are all acts of faith.

Socrates said, “Know thyself”. We must look into ourselves and examine ourselves before we examine or judge anybody else. We must have a sense of our rights and our responsibilities. We must keep examining what we are, and what we offer but also where we went wrong. We must have the courage to acknowledge our mistakes and redeem ourselves through corrective action—or else we may be too late in life, and we will have to suffer a deep wrench in our heart

The quintessence of every creed is this: Just as we cannot survive without food and water, we humans cannot survive without a sense of the meaning or ultimate purpose of life—of life in general, and our own life in particular. Human beings are meaning-seeking creatures. Starved of a sense of ultimate purpose in life, we are doomed, sooner rather than later, to fall prey to alienation, cynicism, anarchy, and even worse to madness and suicide. “Life,” says Pavlov “loses its attraction when it no longer has any purpose. Those who commit suicide make away with themselves because they feel life has lost its meaning. Their tragedy consists in having been unable to surmount a temporary phase of the inhibition of their goal-seeking reflexes.”

Spiritual enlightenment and the pursuit of truth alone can give man the freedom he struggles for. How do we develop a spiritual life? How do we change ourselves so that we can live by the universal spiritual values of Islam? Based on the teachings of classical scholars including Imam Ghazali, practitioners have distilled seven steps to spiritual intelligence that guides us on how we can come closer to God: through the genuine seeking of God, discipleship of a spiritual director, learning and understanding spiritual intelligence, simplicity, and contentment, striving to practice, remembering God, and praying to Him, and self-inspection and self-control.

The spiritual quest is an internal journey, it is a psychic path. Very often, priests, rabbis, imams, and shamans are just as consumed by worldly ambition as regular seekers of material possessions. But all this is generally seen as an abuse of a sacred ideal. These power struggles are not what religion is really about, but an unworthy distraction from the life of the spirit, which is conducted far from the madding crowd, unseen, silent, and unobtrusive. Indeed, in many faiths, monks and mystics lock themselves away from the world to contemplate the mysteries of the cosmos. They shun the clamor and strife of history which is regarded as incompatible with truly religious life.

The struggle between good and evil is a continuous war with victory and defeat taking place each moment. We are often torn between truth and falsehood, greed and generosity, and happiness and regret. Is the struggle between good and evil as old as Adam and Eve? Their son Abel represents the forces of good, while the other son, Cain, represents evil. Both sought to worship God, and both were commanded by God to render a sacrifice. Under the influence of Satan, Cain chose as his gift the worst, diseased sheep in his flock. Abel offered his best sheep to God. Abel’s sacrifice was accepted while Cain’s was rejected.

” And convey unto them, setting forth the truth, the story of the two sons of Adam – how each offered a sacrifice, and it was accepted from one of them whereas it was not accepted from the other. [And Cain] said: “I will surely slay thee!” [Abel] replied: “Behold, God accepts only from those who are conscious of Him. “(Q5:27 )Cain became arrogant and his faith turned weak. Although he fulfilled God’s command of a sacrifice, his intention lacked purity of heart. Through his story we learn that merely performing outer acts of worship as required by religion, is simply not good enough.

The emphasis on humility in spiritual texts demonstrates that it’s a trait that deserves to be revered. As Confucius once defined it, humility is “the solid foundation of all virtues” — and possibly the key to achievement. While humble people are often seen in today’s corporate culture as unassertive, passive types, there’s something truly powerful about them that we can all stand to emulate. Studies have associated humility with healthy adjustment, good leadership, and other positive emotions demonstrating that in order to reach total success, we could stand to benefit from getting in touch with our modest side.

It is in the autumn or the sunset of life that one realizes the true mission of one’s life .it is then that he starts counting the regrets for his errancy. He feels if he is given a new life, he will organize it around the lessons he has learned. The wrench is too great in almost every heart. But then there is no way he can make amends. The Sufi saint Bayazid says this about himself: “I was all revolutionary when I was young and all my prayer to God was ‘Lord, give me the energy to change the world, As I approached middle age and realized that half of my life was gone without my changing a single soul, I changed my prayer to: ‘Lord, give me the grace to change all those who come in contact with me, just my family and friends and I shall be content.’ Now, that I am an old man and my days are numbered, my one prayer is, ‘Lord, give me the grace to change myself.’ If I had prayed for this right from the start I should not have wasted my life”