An abandoned well in Kondhwa became a garbage dump yard. Saleem Mulla rejuvenated it with fresh water, and now it is benefiting thousands of people today. 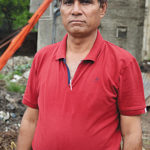 What would your first reaction be if you walk past a heap of garbage? To cover your nose and mouth, right? But people with the usual reactions seldom make a change for the better: and this is what separates Saleem Mulla, a 53-year-old social worker from Pune, from the rest of us. While we would be happy to walk through the filth and hurl abuses at the municipal corporation, Mulla decided to act and solve the issue.
Mulla took lead in not only removing garbage in survey no 42, Jawaharganj Kondhwa Khurd area of Mithanagar locality in Kondhwa, he also rejuvenated it into a well with fresh water, which has benefited thousands of people. “It was originally a well which was lying unused since many years due which there was a deep built up of silt in it to the ground level, making it impossible to use. I dreamt of rejuvenating it and could do it with the help of people”, Mulla says. In 1999, Kondhwa area was included in the Pune Municipal Corporation (PMC) limits and since then, the well was abandoned and was used for dumping garbage, he explains. The well acquired the shape of a garbage depot after that.
The cleaning process began with 75 tractors full of silt unearthed from the well, with drilling hitting a depth of 45 feet. Commenting on the month-long work, Mulla says that the rejuvenation success is a testimony of people’s power through community participation. “People from all communities, comprising Hindus, Muslims, Sikhs, Christians and other faiths, have backed me in this noble work for the cause of humanity. I have been successful because of all my well-wishers and it is not a one-man’s job. I credit the success to all the people who have helped in this arduous task,” Mulla says, honouring the people who joined him in the noble work. The project also showed that ordinary citizens are happy to contribute to a noble cause: the entire project cost Rs 3 lakh, all of which was willingly donated by the residents.
Shankar Seth Prajapati, a resident of Mithanagar Kondhwa, lauded the efforts of Mulla. “Saleem Bhai has taken painstaking efforts and fought against all odds to ensure that the well was revived. His spirit for the cause of humanity barring religion and caste is a shining example of brotherhood and concrete work for the cause of national development,” he says. Pradeep Babar, another Kondhwa resident, said that the utility water is being supplied to the citizens free of cost and was a noble gesture.
Mulla who works as an event-manager in the city, has a passion for social work, for over 15 years now. He is now working to set up a maternity hospital in Kondhwa.
(Extracted from twocircles.net)