Artworks by Little Hands for a Cause!

Kids and teenagers gathered at the Sri Shankara Cancer Hospital and Research Centre on “World No Tobacco Day” to sketch and paint their thoughts out, to tell the world to keep off tobacco! 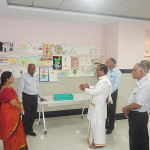 A Sunday, very sunny day, nice time to have coffee and read a book! Well, that was what I had planned to do on May 31, which was a Sunday. But like all things in life, God plans for us and for our good. I was delighted to get a call from Bhavana Jhaveri, who co-ordinates the community-oncology activities at the Sri Shankara Cancer Hospital and Research Centre, here in Bangalore. “This year, to mark the ‘ World No Tobacco Day’ on May 31, we have organized an art competition focused on kids who would unleash their talents by promoting a tobacco free world. So please do come,” she told me.
So off I set out on my toes, the auto driver did not seem too happy when I told him the destination was a “cancer hospital.” The word “cancer” evokes fear and anxiety among most people. Once I stepped into the Sri Shankara Cancer Hospital and Research Centre, I was amazed to see over 200 kids and teenagers ranging from ages 7 to 18 years, drawing, painting, sketching on the themes given to them”¦ ” Growing up without tobacco,” United for a tobacco free world” and “My country Tobacco Free.” It’s so true that children radiate positivity, and this was exactly what I witnessed that day at the Sri Shankara Cancer Hospital and Research Centre.
The staff at the hospital had worked very hard over the months to make this event happen. It was mind blowing to see how these children were using their imagination and making their artworks straight from the heart. They had understood the cause so deeply of telling the adults that tobacco was not good for them. I saw big rays of hope with the children jumping around squealing with joy, displaying their drawings. They formed a ring and in chorus screamed, “Say No to Tobacco”, their voices really came from their hearts!
The team at the Sri Shankara Cancer Hospital had taken great pains to organize lunch for the children and other guests. To motivate the kids, the art competition was followed by prize distribution for the best drawings. But every participant (child) received a memento too.
While the hospital team was busy judging the drawings, I chatted up with one of the patients who had been taking treatment at the Sri Shankara Cancer Hospital. Jayesh Trivedi had been smoking for over 35 years, consuming paan paraag and had developed cancer of the cheek. After being operated upon for this at the hospital, he is making efforts in his own way to advise youngsters to keep off tobacco. I also met up with Deepa, whose husband Shyam Dutt was a heavy smoker, developed cancer and had to be operated upon at the Sri Shankara Cancer Hospital and has recovered. It must have been very traumatic for the family to handle the situation, but the hospital with its very humane approach had contributed immensely to help Deepa and her two sons to cope with the process.
Sri Shankara Cancer Foundation is a not-for-profit organization whose core focus is on cure and prevention of cancer. It is the first charitable cancer hospital in the country to provide state-of-the-art equitable treatment to all cancer patients, including free treatment to the poorest of the poor. The Community Oncology Wing is reaching out to the society, in particular the rural areas, through free cancer detection camps, awareness programmes and tele-oncology as an effort to detect cancer early, and also to prevent cancer.
The Sri Shankara Cancer Foundation is founded by Trustees with rich experience. It is headed by Dr. B.S. Srinath, a reputed surgical oncologist with over 35 years of service to cancer patients. His team of doctors, nurses and the staff, with their very down-to earth and humane approach towards treating patients are providing tremendous relief to the cancer patients and their families, by being holistic in their efforts.
For the over 200 children and teenagers who participated in the art competition at the Sri Shankara Cancer Hospital towards the cause of “saying no to tobacco” it was not just the prizes or mementoes they carried home, but also the hospital had given these kids the initiative to lead from the front”¦ to tell, that they would like to live in a world, free of tobacco and its evil affects!.
The full staff at the Sri Shankara Cancer Hospital headed by the kind Dr B.S Srinath, the soft spoken Bhavana from the community oncology department, her team, the volunteers and of course, the selfless Kamali Sir, who has dedicated his time at the hospital, to guide patients, make them feel comfortable, and make sure things go on well, need to be lauded for their service towards humanity.
Over the years, I have been to seminars on Sundays where so much talk happens about “reforming the society” and where castles were built in the air. I would return feeling gloomy, because I knew it was only “talk in the air”.
But the Sunday with the kids at the Sri Shankara Cancer Hospital, unleashing their talents for the cause of ” a world free of tobacco” through colourful paintings, interacting with the hospital staff and witnessing the deep commitment of the hospital towards the cancer patients, spiritually uplifted me. It was a sort of “Spiritual Satsang” for me where I learnt from the kids and the hospital staff about how to work towards a noble cause positively and realistically!
(For a deeper insight into the noble work of Sri Shankara Cancer Hospital, call 26981128 / 26981000 / 26981100 / 26981101 or email Bhavana Jhaveri at: [email protected]com.
Sri Shankara Cancer Hospital and Research Centre, 1st Cross, Shankarapuram, Basavanagudi, Bangalore 560004)