New Hope for Children in Distress

About 30 kilometres from Hyderabad, in the sleeping suburb of Moinabad, US-based Indian Muslim Relief and Charities (IMRC) runs the Challenger Girls’ Orphanage. 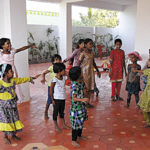 Hyderabad: Rukshar (12), Erum (6) and Zainab (5) are three of the four sisters from a poor family belonging to rural parts of Bihar. Their father died a few years ago, while their mother works as house maid. The family found it difficult to manage two square meals a day, but the little ones became particularly more vulnerable after their father’s death. The three sisters are, however, now happy and are living a comfortable life in a girls’ orphanage in Hyderabad’s suburb, although that has meant staying away from the family.
About 30 kilometres from Hyderabad, in the sleeping suburb of Moinabad, US-based Indian Muslim Relief and Charities (IMRC) runs the Challenger Girls’ Orphanage in collaboration with its country partner Sahayata Trust that has given new rays of hope to 27 girls like these three sisters.
The orphanage has all the basic facilities and the girls live here “like sisters,” informs Khan Zabeen, the Care Taker of the orphanage. It is located close to the co-educational English-medium Challenger International School, run by the same charitable trusts, where all the pupils of the orphanage are also admitted.
“All our girls from the orphanage get the same international quality education, and many of them in fact have been among the best performers in their respective classes,” says Syed Aneesuddin, a city-based realtor and CEO of the Sahayata Trust, the sister wing of IMRC.
On a casual walk, the orphanage looks more like the hostel of a private school, with the best basic facilities and arrangements for proper three meals, besides snacks and fruits for the evening and milk at night. After they return from the school in the afternoon, the pupils get brief recess time before they sit to do their home tasks, given at the school, where a private tutor also comes to help them. After evening snacks and fruits, they also learn basic Islamiat from the resident teacher.
Each girl in the orphanage has a heartrending story hidden behind her smile, although many of them are gradually leaving their past behind for a new life and opportunities. Take Reshma, for example, whose parents had died and her grandmother used to force her to beg, and burnt her body parts if she resisted. She was rescued by local volunteers three years back and is now happy here and going to the kind of school she never would have had imagined.
Although the orphanage is meant for girls, an exception was made for Ghouse (7), the younger brother of one resident Zahira, five years ago when both their parents passed away.
Challenger Girls’ Orphanage has the space and capacity to house over 100 pupils and is looking for more sponsors who are willing to support the expenses of one or more pupils. Besides Challenger Girls’ Orphanage, IMRC also supports thousands of poor destitute and orphans studying in madrasas or schools in the country through a number of partner organisations.
Indian Muslim Relief and Charities (IMRC) is a US based non-profit organization which began in 1981 and helps run several programmes throughout the country in partnership with over 100 organizations. It focuses on providing education, emergency relief, medical and legal aid, shelter and food for the needy. IMRC has been at the forefront of providing immediate relief to affected victims of the 2015 Nepal earthquake, 2014 Kashmir Floods, 2013 Muzaffarnagar riots, 2012 Assam riots, and other natural/man-made calamities. n