At a time when several flood relief collection units in Kerala are struggling to find enough materials, Noushad, an ordinary street vendor in Ernakulam’s famous Broadway market, has set an example by donating his entire stock to those in relief camps in Nilambur and Wayanad. A resident of Malippuram near Vypeen in Kochi, Noushad had brought new clothes to sell for the festival sale, but contributed them to relief volunteers instead. He says there is no better way of celebrating the Eid al-Adha this year than this.
A video of Noushad impulsively filling several sacks with clothes went viral after it was posted on Facebook by actor Rajesh Sharma. Shot at Noushad’s warehouse, Sharma explains that his team was taken there by Noushad after the latter had met them on the road. Though he had locked the place by then, he reopened the room for Sharma’s men and offered them everything. “We told him we can’t accept anything that is old. In response he told us we can take all the new clothes from here,” Sharma said in the video. The video shows Noushad filling more than five sacks with children’s dress and unopened packs of pants and women’s wear.
“We cannot take any of these along when we leave this place. God will repay me for whatever I give today. Monday is Eid al-Adha and this is how I am planning to celebrate it this year. This is a small thing that I can do to those people who are facing nature’s fury,” Noushad said. When a reporter pointed at his fast-emptying shelves and asked, but hasn’t everything gone, Noushad is seen saying “God will give more.”
Noushad’s act was appreciated by many people and the video was widely shared on various social media platforms. Many celebrities also shared the video and said Noushad has set an example by himself to the people by his rare act of humanity.”They say it is the invisible hands of big people that hold the sky from falling. Dear Noushad, I believe your hand is one among those”¦” Malayalam actor Siddique wrote on social media. The state Health Minister KKShailaja posted Noushad’s photo along with his words on the importance of joining the relief activities on her official Facebook page to wish all Keralites a happy Bakrid. 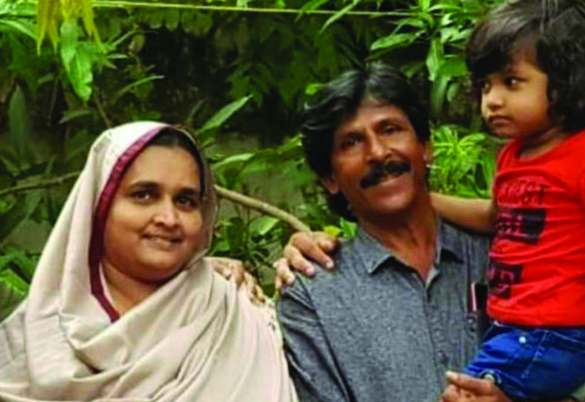 Noushad with his family