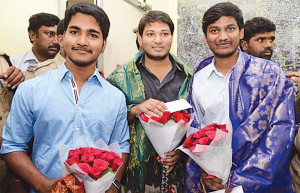 Hyderabad: Deputy Commissi-oner of Police (West) V. Satyanarayana felicitated Shaik Lateef, Prasad and Hari for their honesty. The trio, who went to collect cash from an ATM, found the door open and Rs. 24.50 lakh inside the machine. They immediately informed the police who came and collected the cash.
They went to an ATM centre to withdraw Rs. 200 for their friend’s birthday party. But, what they got in return tested their honesty, upbringing and even their friendship.
For the three friends Shaik Lateef, Durga Prasad and Hari Prasad, the sight of nearly Rs. 25 lakh lying open in the ATM machine was a big shock of their lives.
“Never did we see such a huge amount at one place. Thanks to the Almighty we did not get influenced at that point of time,” recalls Lateef. The trio unanimously decided to immediately alert the police control room on 100. Within minutes, a police team from S.R. Nagar police station rushed and took possession of the cash.
While Lateef, hails from West Godavari of Andhra Pradesh, his friends, Hari and Durga Prasad are from Mahabubnagar district and stay at a hostel in S. R. Nagar area. The three friends, who are desperately seeking employment, went to the ATM centre to withdraw cash and buy a cake for the friend’s birthday.
“I inserted the card and withdrew Rs. 200 cash, when I noticed the door of the ATM machine was open and there were piles of cash inside,” says Lateef, who completed his B. Tech (electrical) last year. His father works as a teacher at a government school.
Durga Prasad, who completed his B. Tech (EEE), last year is also son of a school teacher, while Hari Prasad’s parents run a tiffin centre in Mahabubnagar. Prasad is pursuing Chartered Accountancy and working as a part-time accountant at a private firm on a monthly salary of Rs. 10,000.
“Every month I save about Rs. 3,000 for my studies. We are grateful for our upbringing because our parents taught us a lot on the virtues of honesty. We owe it to them,” he says. The three friends were felicitated by the West Zone police and by the State Bank of Hyderabad (SBH) authorities.
(www.thehindu.com/news/cities/Hyderabad)