Yakub Bee – An Angel for the Aged

Islamic Voice 0 May, 2017 12:00 am
Pope Francis to World Leaders: “Open Your Doors to Migrants”
Bangalore’s Lamp of Love
Muslims in Kolkata Find a Place to Call Home 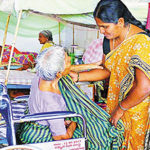 Warangal, Telangana: “Extending service to the needy is what makes my day, awards and applause subdue the anxiety and restore my confidence,” says Yakub Bee, founder of Sahrudaya Old Age Home in Hanamkonda. Yakub Bee and her husband Mahboob Ali have opened their home for elderly, homeless and destitute people since 2007. Recognising her services, the World Peace Festival Society International (WPFSI) has conferred on her the Shanthi Dhootha award. Yakub Bee lavishes love and affection and recognises no religious or social barriers. She looks after the food and medical needs of her inmates. “Most of the people living in our home have been abandoned by their children. Some of them have no memory of their whereabouts. Such people deserve to be cared for,” says the compassionate lady.
Yakub Bee, who hails from Ellanda village in Wardhannapet mandal, used to work as a tailor. Her husband Mahboob Ali used to do petty jobs. Mahboob was inspired by a rickshaw-puller who ran an old age home in Khalsa in Amritsar. “Starting from two persons in 2007, we now provide shelter to 100 people,” says Mahboob Ali.
(Source:  http://www.deccanchronicle.com)