Islamic Voice 0 July, 2016 12:00 am
Prime Property is a Bone of contention
Consultative Meeting on Muslim Issues – Need for Think-Tank Stressed
Mercy Mission Angels: There is no stopping them 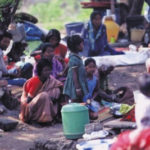 Does untouchability exist among Muslims?

A recent study by the Giri Institute of Development Studies, Lucknow, confirms that it does. The study based on a survey of 7,195 households located across 14 districts in four regions of Uttar Pradesh shows that despite Islamic sacred text’s claim of equality, the Muslim society in Uttar Pradesh maintains distinctions and practices discriminations based on caste. This survey was carried out between October 2014 to April 2015. The study was done by Prashant K. Trivedi, Srinivas Goli, Fahimuddin and Surinder and a report based on its conclusion was published in the Economic and Political Weekly, in its issue dated 15 January 2015.
Caste based stratification is distinct feature of Indian society. Caste based inequality manifests itself in concepts like someone being pure or impure by birth; ascending order of holiness and descending order of lowliness; untouchability or unseeability; endogamy (i.e., marrying within one’s own community); one’s association with certain occupations; and inclusion or exclusion in matters of dining, habitation, social interaction etc. While caste may be a distinctive feature of Hindu society drawing its legitimacy from the scriptures, it has influenced, nay infected all communities inhabiting India. While the former untouchables among Hindus were included in the scheduled castes category in the Constitution for affirmative action (reservation in education, employment and political representation), those among the Buddhists and Sikhs were brought under this in different stages. But the State maintained that Muslims and Christians following faiths of foreign origin, do not practice untouchability or are not affected by this practice.

‘Unclean Professions’
The Mandal Commission Report included Muslims in the Other Backward Castes (OBC) category and certain caste among Muslims were categorized for reservation. But there was staunch opposition to inclusion of Dalit Muslims in SC category even though evidence was available that members of occupational groups like Halalkhor, Lalbegi, Bhatiyara, Nachi, Pasi, Pamaria, Nat, Bhant, Khakrob (sweeper), Mehtar (Scavenger) etc suffered from discrimination just as former untouchables did among the Hindu communities. Authors like Aftab Alam, Ali Anwar etc had pointed out that uppercaste (Ashrafs) Muslims refused to drink water from the utensils shared by Dalit Muslims. In some cases, their areas of burial were marked in Muslim graveyards and even more disturbingly, they were served leftovers in congregational feasts, were segregated in mosque etc. Yet lack of empirical evidence kept them excluded from the SC category and there was continued refusal to recognize Dalit Muslims as distinct from non-Dalit Muslims. While among the Hindus those who followed these occupations were known as untouchables, the Muslim community knew them as Arzals.

Textual Equality
The study notes that establishing untouchability among Muslims is a tough task as most Muslims take shelter behind the textual equality of Islam and refuse to recognize the practical realities of the day-to-day life and interactions. According to data collected by this household survey, a substantial proportion of the Dalit Muslims report that they do not receive an invitation from non-Dalits for wedding feasts, etc. Since Dalit Muslims lived in separate enclaves in villages and towns and were thus excluded from categories of invitees (which is mainly on the basis of sharing the neighbourhoods or relationships), it was a historical fact that they suffered from segregation of living areas.
Then there were three different indicators of differential treatment i.e., 1- they are assigned seats in separate rows in non-Dalit Muslim feasts, 2- they ate after the uppercaste Muslims had finished their meals, 3- they were served meals in different utensils.
Around 8% of Dalit Muslim respondents report that their children are seated in separate rows in classes and also during mid-day meals in their schools. To elicit a response of Dalit Muslims on discrimination in religious spaces, a query on burial grounds was posed to them. At least one-third of them state that they are not allowed to bury their dead in an upper-caste burial ground. Most of the Muslims offer prayers in the same mosque, but in some places Dalit Muslims felt discriminated against in the main mosque. A significant section of Dalit Muslims also feel that their community is seen as being associated with menial jobs. Respondents who studied at the madrasas were found to be more vocal about the untouchability they have experienced.

Exclusionary Measure
Treatment of Dalit Muslims in uppercaste (Ashraf) homes was yet another indicator. Around 13% Dalit Muslims report having received food/water in different utensils in upper-caste Muslim houses. This proportion is close to 46% in the case of upper-caste Hindu homes. Similarly, around one-fifth of the respondents felt that upper-caste Muslims maintained a distance from them, and one-fourth Dalit Muslims went through similar experiences with upper-caste Hindus.
The study concludes that untouchability is not confined to only Hindus. It says, “It (untouchability) spreads far and wide and perhaps no Indian religious community can escape it, including the Muslims. However, one has to admit that when it comes to enforcing these social sanctions with zeal, upper-caste Muslims are no match to their Hindu counterparts.

Realities of ‘Lived Islam’
The study finds no ground to keep the Dalit Muslims excluded from the SC category of reservation and says ‘lived Islam’ rather than ‘textual Islam’ should be taken into consideration while state formulates the policy.
(For more content on the subject, log onto: http://www.epw.in/journal/2016/15/insight/does-untouchability-exist-among-muslims.html#sthash.f4jIuNUf.dpuf)