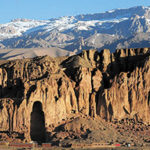 Kabul: The reconstruction of one of the largest Buddha statues in the world is expected to start in Afghanistan’s Bamyan province soon. A decision to this effect was taken during a 3-day meeting in Germany. Provincial governor Mohammad Tahir Zahir said the experts attended the meeting in Munich that led to adoption of a final decision for the reconstruction work. The several century-old Buddha statues of Bamyan, in the Hazarajat region of central Afghanistan, situated some 230 km northwest of Kabul, were earlier destroyed by Taliban militants.
(Extracted from http://www.khaama.com)