Cookery Manuscript – From Bihar to London 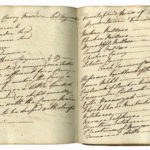 London: A handwritten cookery manuscript containing a glimpse of the menu from England’s first Indian restaurant has sold for $11,344 (Rs 7.6 lakh) at a London book fair. It refers to dishes like “pineapple pullaoo” and “chicken currey” from the Hindoostane Dinner and Hooka Smoking Club, opened in 1809 at Portman Square, London, by Sake Dean Mahomed, whose roots lay in Bihar. “This is the first known record of a priced menu from Britain’s first Indian restaurant”at a time when printed menus were rarely available,” said Brian Lake of Jarndyce Antiquarian Booksellers in London, which sold the volume at the ABA Rare Book Fair to an American institution last month.
The manuscript, titled Receipt Book 1786 on the front, also contains handwritten recipes and receipts. It includes a two-page “bill of fare” from Hindoostane, listing 25 Indian dishes with prices.
These include makee pullaoo (1.1.0 pounds), pineapple pullaoo (1.16.0 pounds), chicken currey (0.12.0 pounds), lobster curry (0.12.0 pounds), coolmah of lamb or veal (0.8.0 pounds), together with breads, chutneys and other dishes. It ends by noting that there are “various other dishes too numerous for insertion”. Towards the end is a recipe “to make a curry powder”, attributed to Lord Teignmouth (1751-1834), who was governor-general of Bengal between 1793 and 1797 and later became a patron of Sake Dean Mahomed’s restaurant. Sake Dean Mahomed went bankrupt in 1812, and the eatery struggled on as Hindostanee Coffee House under a new management before disappearing in 1833.
(source: http://www.telegraphindia.com)