Islamic Voice 0 May, 2017 12:00 am
Cookery Manuscript – From Bihar to London
Conference – Reflections on Religion, Religions and Beyond
Islam’s Modesty Is for Both Men and Women

Muslim men may fret that they lose, when their women win, but history tells us that when women advance, humanity advances. 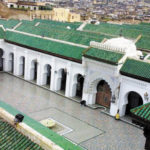 In recent years, due to the global socio-political climate, the phrase “Muslim woman” might conjure an image of a demure un-empowered woman sheltered by her burqa. Yet this image is not what our history records or what our present reflects.
Muslim men may fret that they lose when their women win, but history tells us that when women advance, humanity advances.
No one will believe that the first institution granting academic degrees was founded by a Muslim woman?
Founded in 859 (almost a hundred years before the foundation of Al Azhar in Cairo) and nestled in the old medina of Fez, Morocco’s University of al-Qarawiyyin is acknowledged in the Guinness Book of World Records as the oldest institution in the world operating as an academic degree-granting university.
Fatima al-Fihri migrated with her father Mohamed al-Fihri and sister Maram from al-Kairouan (al-Qayrawan) in Tunisia, to Fez in Morocco. She was well versed in classical Islamic learning such as fiqh (jurisprudence) and Hadith (Islamic traditions based on Prophet’s life) Fatima inherited a large fortune from her father which she used to build a mosque and university. Mariam, Fatima’s sister, was the sponsor of the Al-Andalus mosque, also in Fes.

A Pious Woman with an Architectural Acumen
Fatima was undoubtedly a pious woman with a visionary and architectural acumen who was guided by a magnanimous heart and a perspicacious mind. She was endowed with a fortune bequeathed by her father. Far from reveling in wealthy pursuits, she used the resources very frugally to set up a mosque, university and library”the highest trinity of Islamic piety. She personally supervised the entire gigantic enterprise, from putting up the foundation through to the functionalizing of these institutions. When she embarked on her mission, she had lost her father, husband and brother”all primary sources of support and protection for a woman”any other Muslim woman would have retreated to the backwaters of domestic life. But Fatima appears to have been an extraordinarily inspired and determined woman with steely grooves. All her great achievements came during periods of loneliness, when women normally shun the world and seek company with the home.
Cultural and Intellectual Interactions
The most efflorescent period for the institution spanned between 12th and 15th centuries when it was lavishly patronized by Almohades and Merinids, the university quickly became one of the leading education centres in the world. Located within the compounds of a mosque that would in the coming centuries expand to become the largest enclosed mosque in the continent of Africa with a capacity 22,000, the university has a marvellous architecture.
The university played a pivotal role in the cultural and intellectual interactions between the Middle East and Europe. A variety of subjects were taught at the university, including Islamic law, medicine, mathematics, astronomy, chemistry, history, and” music.
The initial curriculum focused on the religious sciences and later covered other disciplines such as grammar, geography, history, mathematics, medicine, chemistry and astronomy. The university played a leading role in the cultural and academic relations between the Islamic world and Europe. The cartographer Mohammed al-Idrisi (d. 1166), whose maps aided European exploration in the Renaissance lived in Fes for some time, suggesting that he may have worked or studied at Al-Qarawiyyin.

Bridge of Knowledge
The prestigious academic reputation transcended religious divisions. Popular tradition suggests that Gerbert of Auvergne (930-1003), who would become Pope Sylvester II who is credited with introducing Arabic numerals to Europe, was once a student at al-Qarawiyyin.
The university served as a bridge of knowledge between Africa and between the Middle East and Europe. When Muslims were expelled from Spain in the 13th century, many came to FÃ¨z and to QarawwÄ«yÄ«n. They brought with them their learning of European and Moorish arts and sciences.
Among its alumni were, Leo Africanus, Andalusian diplomat and renowned traveler and writer, and Rabbi Moshe ben Maimon. Ibn Rushayd al-Sabti Mohammed Ibn al-Hajj al-Abdari al-Fasi, Abu Imran al-Fasi, a leading theorist of the Maliki School of Islamic jurisprudence, Leo Africanus, a renowned traveller and writer. The famous Jewish physician, philosopher and theologian, Maimonides who introduced articles of faith to Judaism, and Fatima al-Kabbaj, one of the first women to have studied at the University;
World’s Greatest Libraries
Pioneer scholars such as, Ibn al-Arabi, Ibn Khaldun, Ibn al-Khatib, Al-Bitruji (Alpetragius), Ibn Hirzihim, and Al-Wazzan were all connected with the madrasa either as students or lecturers. Among Christian scholars visiting Al Quaraouiyine were the Belgian Nicolas Cleynaerts and the Dutchman Golius and Gerber of Auvergne who later became Pope Sylvester II and went on to introduce Arabic numerals and the concept of zero to medieval Europe
The university boasts of one of world’s greatest libraries. Founded in 1349, by Sultan Abu Inan, and completely restructured under King Mohammed V, the grandfather of Morocco’s current monarch, the Qarawwiyin’ library is one of the oldest and highly respected libraries of the world. For centuries, historians and scholars travelled to Fes to peruse the library’s shelves. the library fell into disrepair in the period of decline of Islam’s Golden Age .After centuries of neglect, the Moroccan Ministry of Culture recently restored the library. From calligraphic designs on the walls to ceramic patterns on the floors and wooden carvings on the ceilings, the fingerprint of almost every ruling dynasty since the 9th century can be seen in the architecture.
A special room with strict security and temperature and humidity controls, houses the most ancient works. The library’s collection of over 4000 manuscripts include volumes from the Sirat Ibn Ishaq, the earliest collection of Islamic and the famous Muwatta of Imam Malik written on gazelle parchment. There is a treatise on the Maliki school of Islamic jurisprudence. Its 200 pages of gazelle leather are inscribed with tiny immaculate calligraphy dotted with embellishments in gold ink. There is also a 12th-century copy of the Gospel of Mark in Arabic.
Another precious possession is a ninth-century copy of the Qur’an, written in ornate Kufic script on camel skin given to the university by Sultan Ahmed Al-Mansur Al-Dhahabi in 1602.
History show that early Muslim women reformers were authentic exemplars of modern economic and social philosophies that have become modern fetishes, more important, the early role models were altruistic whereas many of their present day peers are driven more by selfish impulses.
What’s important about Fatima al-Fahiri’s story is that she creates not only a sense of pride for younger girls, but also a sense of possibility. She is someone that young girls can identify with.
(Extracted from www.newageislam.com)